Steve Irwin: A Loss The Apple Community Can Learn From 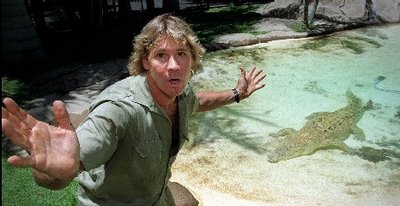 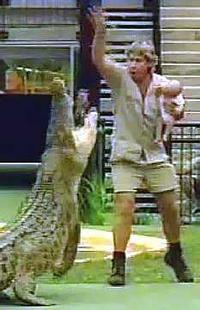 Often mocked and imitated; Steve Irwin famous for poking snakes, alligators, crocodiles, and other fanged and venomous animals then saying his almost patented "Crikey" (Australian expletive) when said fanged or venomous animal would strike and sometimes bite, was killed on Monday.

And so ... the Apple community can learn a lesson from this.

Yesterday from The Macalope:

Does the author of JackWhispers really think the Macalope is George Ou? As an addendum to his list of the Goons of the Mac World, Philip writes:

Now, the Macalope tried to find the irony in there, but after about three hours of sitting and staring blankly at it and shaking his be-horned head, he was unable.

So, let’s get a few things straight.

First of all, Philip, you got the subhead wrong. See above. Second, did you actually read the entry you linked to and decide George Ou is filled with self-loathing? Third, you don’t need that comma after “called.”

Does George Ou have antlers?

No. I believe he does not.

You know, you don’t grow a rack like this overnight. So, this whole thing is kind of insulting.

UPDATE 9/5: The author responds in comments, claiming to have fixed the post, and deletes the Macalope’s comment from his blog.

For the record, what the Macalope’s comment said was:

The Macalope is decidedly not George Ou.

Did you even read the post you linked to?

[Actually, the Macalope found a cached copy and “even” wasn’t even in there.]

A blog post about George Ou has been started called, The Macalope: Covering the Mythical Mac User - very goonish!

But that’s still not right. And now it doesn’t even make any sense.

Well, the Macalope doesn’t want to make a whole “thing” about this. On the whole, he agreed with the list, he was just flabbergasted at being mistaken for the man he just spent the better part of a week skewering.

The post in question was ambiguous and I thought poorly worded. The Macalope is not clearly named nor does it clearly show who the author is or why it was started. The news is yet another redundancy on the Mac web as far as I can see.

I'm also a bit upset that that some of my fellow Mac bloggers didn't bash the author for this ill tactic as well.

As you can see below ... even the best of us bloggers make mistakes. [Gruber had trouble spelling the word "statements"] I made a two fold mistake by not understanding how Gruber worded this and then by not wording my "report of the finding" very well. Now that it's been pointed out to me, I don't see how I misread it, but I did. I didn't appreciate it being pointed out as some spectacle on a website drawing negativity towards my website. Usually my mistakes are pointed out in the comments.

The post I misread as George Ou's New Blog:

It appears as if the whole post on The Macalope was a calculation by the author to discredit me for some reason. Reread what I had to say in The 7 Goons Of The Mac World:

A goon's purpose in life is to always appear to be right so they can continue to make money from their "controversial flamebait opinions". When someone as well respected as John Gruber points out their flaws, false statements, or purposeful lies, they have to cover by calling said respected person (Gruber by example) an irrational, emotional, cultist thinker or writer. In my own little world here on this site, I deal with "goons" too. Those that I do critical articles about usually lash out in some emotional "hissy fit" on their own blogs or websites or try to discredit me in some way.

I learned that I can't even take respected bloggers and journalists for their word ... or at least how I read them. This is one flaw in the way that Gruber delivers his "newsbytes". There is so little information in the "quip commentary" that headlines or the purpose of the link can become ambiguous.

I could point out that my website is called Fix Your Thinking ... not Jackwhispers. That name hasn't really been associated with this blog since January and even then I had been transitioning away from the name Jackwhispers for a few months.

For The Macalope blog to point my site out as some "freak show" spectacle without sending me a message to correct it and instead getting press on his website over my mistake is not only irresponsible, it's just downright stupid. Why pick a rift and burn a bridge with such a small site as mine? I made a mistake and I would have corrected it had anyone pointed it out.

Please don't misconstrue what I'm about to say as a deathwish. I hope the Macalope blog continues to enjoy increased popularity ... as this site has. But when you poke at Lions and Tigers and Bears - eventually you are bitten. Sometimes you die ... all because of disrespect.

In my opinion ... the only way to correct this is for the Macalope to retract the blog entry and/or give me an apology for acting irresponsibly. The "updated" post with the info made into spectacle had only been up for 26 hours. The original post had been up for 6 days.

From the Macalope About section:

Obviously, I am the progenitor here Jackwhispers: Fix Your Thinking = Jackelope. Don't embarass the bloodline Macalope.

Email ThisBlogThis!Share to TwitterShare to FacebookShare to Pinterest
: Macalope

Steve Irwin's baby son was NOT in jeopardy. Not only was he not as close as the camera showed (it's in the perspective - other cameras show this), but there were support staff right off camera. You should visit central PA - farm country - where you routinely see very young children playing around horses, cattle, goats, etc. I guess we should go after those parents for they have surely 'crossed the line.' And don't even get me going about families with young children and dogs from potential 'dangerous' breeds. Do a Google search on how children are killed or maimed each year by the 'family pet.' I would have trusted Steve any day with my children over some of these parents.

Try focusing - just as bit - on the positive things Steve did. He made millions aware that 'creepy crawly' creatures out there deserve the same support and respect from human beings that we generally show fur coated critters.

"I could point out that my website is called Fix Your Thinking ... not Jackwhispers. That name hasn't really been associated with this blog since January and even then I had been transitioning away from the name Jackwhispers for a few months."

Guess what. You have "(title)Jackwhispers: Fix Your Thinking (/title)" coded into this page.

To compare a blog entry to a man's life is unbelievable. It shows your lack of perspective and cluelessness. A father and husband is dead and you compare it to a stupid blog entry. Get a life.

"Anonymous said...
Steve Irwin's baby son was NOT in jeopardy."

What parent in their right mind would take a baby into a croc pen? He lost any respect when he did that - he was using his kid for a publicity stunt. If he had stumbled and dropped the nipper, the snapper could have had him as a starter, no matter how close his 'support staff' were.

He even admitted he was wrong -
If I could have my time again I would probably do things differently, but I would be considered a bad parent if I didn't teach my children to be croc-savvy.
Steve Irwin

Teach them to stay away from crocs, not treat them as playthings.

Sad as his death is, and his family have my condolences, he pushed wildlife to the limit and he overstepped the line and paid the price.

You play with fire, you're going to get burned....

You've used a tragic news event that was felt by many to shamelessly troll for hits for a childish article about "he said, she said."

I've read this blog fairly frequently, but if you're stooping to this, I'll pass from here on out, thanks.

Oh, and BTW: a "jackelope" is a well-known fictional creature (remember the adventures of the jackelope on the old 'America's Funniest People' show?) -- get over yourself.

My lack of mention of condolences doesn't mean I don't send them. I didn't make fun of Steve Irwin. I just noted that he crossed the line and bloggers in the Mac Community like to cross the line just to get hits and controversy rolling.

Try focusing - just as bit - on the positive things Steve did. He made millions aware that 'creepy crawly' creatures out there deserve the same support and respect from human beings that we generally show fur coated critters.

Osama Bin Laden built and paid for hospitals to be built in Afghanistan - I'll try to forget he was the mastermind of the World Trade Center bombing so I can focus on the positive.

Steve Irwin did a lot for conservation, but I like how that's having to be made as a defense for his otherwise stupid and dangerous antics. Steve Irwin did a lot for animal awareness. I kow a lot of kids emulate and imitate him. He was far different from the days of filming Wild Kingdom - he had to go a step further and touch (read as confront) the animals. I would strongly disagree with any naysayers here that think teasing an alligator with a lawnmower is humane.

To tie this back in ... Mac bloggers are losing their sense of community ... at the expense of confrontation of other Mac blogs and Mac figureheads.

I'm pretty amazed at the stupidity of this blog. Thank you "Macsurfer" for letting me know where not to go on the web. Jackwhispers...hahaha.

I'm pretty amazed at the stupidity of this blog. Thank you "Macsurfer" for letting me know where not to go on the web. Jackwhispers...hahaha.

It's nice to join the ranks of Rush Limbaugh and Bill O Reilly - lots of fans ... a few vocal haters.

Actually, you join the ranks of Howard Stern and Paul Reiser: a$$holes this planet can do without.