A website called FOLLOWTHEWHITELAPTOP.COM started a few days back.

We started with a little white 1.83 GHz Intel Core Duo processor MacBook at Cambrian House's Calgary Office. On September 10th, 2006 we bid our laptop farewell and sent it on its way from Calgary, Canada to San Francisco, California. Guy Kawasaki was presented with TheWhiteLaptop before being induction into Cambrian House's National Viking Association. Now it is up to Guy to sign it, check it out, and pass it on to another technology rock star like him.

We've also asked them to leave comments and answer a few personal questions for our blog. We will keep you posted on the whereabouts of TheWhiteLaptop as it travels the world collecting signatures.

Will the laptop be passed on to other technology rockstars and make it back in time for auction? Fate will decide.

We have set a deadline to have the laptop sent back to us by December 31st, 2006, at which time we will post it on eBay for auction. All proceeds from the auction will go to the Youth For Technology Foundation, an international non-profit organization that seeks to bridge the digital canyon among disadvantaged communities in developing countries.

It’s been a few days since we presented the WhiteLaptop to Guy Kawasaki and we’re on the edge of our seats anticipating who’ll get it next. He’s been gracious enough to let us know that if he has time he’ll try to get a few extra signatures on the laptop before sending it off. We’ll keep you posted on the whereabouts of the little WhiteLaptop as soon as we hear word of its travels. Fortunately, we have some inside footage of the first transaction; Cambrian House presenting Guy with the WhiteLaptop (at Guy’s house in the valley!) ...

Who would YOU like to sign the WhiteLaptop next? We have our fingers crossed for technology celebrities like Bill Gates or Steve Jobs, but if you’d rather some Angelina Jolie or Johnny Dep action then you’d better say so in your comment. Come on, don’t be shy. 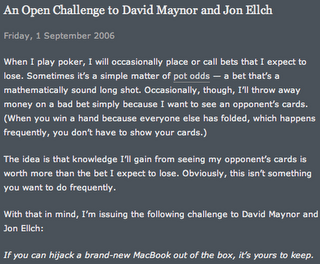