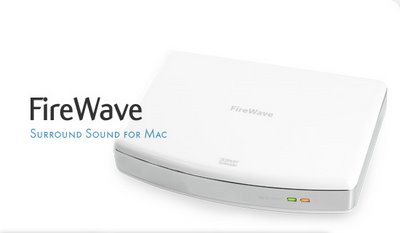 Ok Ok ... so this review has been almost a month delayed in posting. At least it wasn't as long as this "almost mythical" product has been in the pipeline. 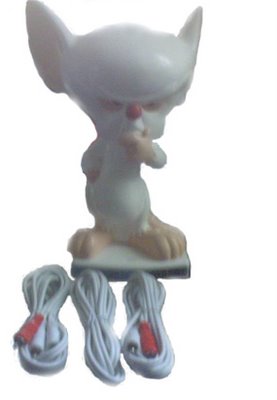 If memory serves me right ... this was announced sometime soon after the Griffin RadioShark - another long delayed product that Griffin finally made good on almost a year and a half after it's announcement. Griffin started taking pre-orders for the FireWave in January of 2005!

And if memory serves me correct ... Griffin actually prototyped this in 2002 at MacWorld New York.

The thing that most bums me about the long product delay is that Firewire has turned less Consumer and more Pro since FireWire support was dropped from the iPod line.

So ... why my delay? At first ... I planned to use it for a week, then post my review. Then, I decided I would just write the review when I had a small amount of free time two weeks ago. Then, I started having a few problems with the device and so I extended my review to a 30 day test.

The product is this:

Well, I thought I knew what the FireWave was suppose to be when I first saw it pre-announced on the web. For what I thought it was ... I thought I wanted one.

I thought this would be able to replace my amp/processor. And it has ... but not without a lot to figure out.

Coming with no "laymen" usage guide or a diagram of an example setup ... it's hard to know what to actually do with the device. Also, not coming with any cables make additional purchases not only necessary but mandatory to use the device properly. 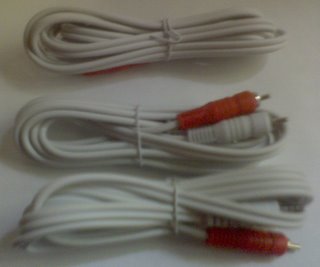 I would have thought that the FireWave would come with standard speaker connections ... like this: 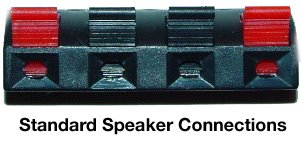 I know of no quality speakers that have a 3.5mm jack connection. In fact, Radio Shack doesn't even sell such a conversion cable. You have to buy the cables as pictured above and splice them to get the right connection. All I wanted is a small portable solution to hook up multiple speakers quickly and easily. With the FireWave, you might as well just go from the sound out port to an AMP and be done with it ... skipping the FireWave entirely.

Now, if in a more permanent setup the FireWave is terrific! Sound is crisp and clear. Software setup and recognition, which unlike hardware setup, is very nicely explained in the manual that is part of the "software jacket".

I was able to acheive a very nice spatial sound with both a MacBook and a PowerBook G4.

A few times I experienced a small hissing sound ... but I found that it was interference coming from other cables. Replacing the thin FireWire cable Griffin provides seem to stop this from happening too often.

The FireWave is driverless but does require Mac OS X 10.4.6 (Tiger) or higher. There is an application called Audio MIDI setup provided within your standard system install (located in the Utilities folder) that IS REQUIRED to recognize the device. There is also a program provided on CD, by Griffin, called FireWave, but it's not required. It is useful for configuring Dolby related settings.

* Note that there is no passthrough digital output (optical) to use to connect to a receiver and the FireWave does not encode anything.

The only annoyance is (and it's not really Griffin's fault) is that EACH APPLICATION must be changed to ouput anything higher than 2 speaker output (Stereo). Meaning ... you must change the Preferences in applications such as DVD Player, iTunes, Games, etc etc to hear the FireWave output anything other than stereo. The default setup for Mac OS X is stereo.

I'm not much into star ratings or pros and cons lists because I think they are subjective. I really think Griffin needs to go back to the drawing board on this. It's a disappointment, but only from the aspect of its delay. I would recommend it for sure, but only if you are a gadget hound.

* A small conspiracy - while mentioned in just about every press release on every major Mac News site that this unit has 3 (3.5mm) jacks - no product picture on the Griffin website shows this. It's almost as if they are trying to hide the fact that it's not standard! I think it only adds to the confusion of what the device's true purpose is.

You hooked speakers up directly to the FireWave? This has no amplifiers in it, but line-outs to connect your amp(s). The amp will have the speaker connectors.

Yeah ... that's what I initally thought the firewave does and it actually works. As for the connecting to an amp I really didn't want to do that ... what's the purpose of having it so compact otherwise? That was the engineering feat the copmpactness ... it therefore serves no function whatsoever.

I think that hearing something is "compact" is a selling point, regardless of its functionality, lol!
Matt

I think the FireWave is intended to do something a bit different to what you're expecting it to do. It provides 5.1 surround sound for the Mac. I'm buying it because I have 5.1 speakers for my PC and want to watch DVDs on my MacBook with surround sound.

I don't think it's intended for audiophiles - a Mac Pro with a high end sound card would be more suitable. It's aimed at people like me, who have come to expect 5.1 sound from our computers.

This is also why it uses 3.5mm jacks rather than speaker outs. It's aimed to work with 5.1 computer speakers, like the Creative range - generally they'll have an amp integrated in the bass speaker, and connection cables are 3 x 3.5mm jacks (front, rear and centre/bass) as standard. High-end fidelity it's not - but convenient it is.

For what it does, the FireWave is perfect. From what it sounds like you want, you'd do better using the optical audio out from the MacBook - higher quality stereo.

It's great product ... just not what I was expecting.

The author of this review is way off base. The purpose of this device is to allow Mac users to take advantage of the swaths of affordable, non-digital surround speaker systems on the market today, and not to drive speakers directly.

While I agree the product does not appeal to the masses, this is *exactly* what I have been looking for since my iMac purchase.

The challenge with the iMac (and any other Mac on the market today) is the only way to output 5.1 surround is via the optical jack (which a separate adapter is required to enable). This is great if you have a full stereo in your office/room/etc, but lousy if you are suited fine by a 5.1 computer style surround system, or if you already have invested in one.

I'm droning on here, but for those who were in the predicament I was, this is the greatest thing since sliced bread. Rock on Griffin!

I'm not off base - the product is not listed as a pre- amp - which is exactly what it is.

I did do something with it not as intended to see if it would do it ... and it does, that's all.

It's okay, but there have been similar compact Mac compatible USB solutions out there for a while.

Well i think the fact that it's not usb is the big ++ here, no usb overhead like all the other products.

I know I'm very late to this party, but I just bought a Firewave at the closeout price to use as a pre-amp with my Mac Mini and two stereo power amps (line inputs, no controls) driving four high quality speakers.

The sound is good. The only problem is that there doesn't seem to be any way to adjust the front-back balance when in 5.1 mode. Does anyone have an idea on that?

I was look at buying this product but have ben unable to find someone who's bought one. Basically, i have MP4 files with 5.1 audio. Does the Firewave produce 5.1 surround sound from the MP4 palying through Quicktime. I have an Intel iMac.

It will output to an amp/receiver that supports 5.1 connections. If the audio is coded for 5.1 and you change Quicktime's settings to output 5.1 - the FireWave will output to the proper speakers and channels.

You can achieve the same with many USB MIDI devices.

I should be getting one of those firewaves within next week.

main reason behind buying that toy is that it splits audio output channels to three different channels .. as in i can (with my dj s/w) have channel (A)Sent to my amp. and speakers. and have channel (B)sent to my headphones for cuing. and if i'd like i can have channel (C)sent to another external source, say recording device or something.

as soon as i get my new toy, i'll repost and let you know how it went.

I should be getting one of those firewaves within next week.

main reason behind buying that toy is that it splits audio output channels to three different channels .. as in i can (with my dj s/w) have channel A)Sent to my amp. and speakers. and have channel B)sent to my headphones for cuing. and if i'd like have channel C)sent to another external source, say recording device or something.

as soon as i get my new toy, i'll repost and let you know how it went.

If you can post a thorough review with pros and cons i'd be happy to post it on the main page with a link here to that article.

One interesting note ... for the first time in 5 years - the Macbook/iBook (because it does not include FireWire) will not be able to use this ... there's a good chance that the new macmini will exclude FireWire as well.

See also the description I wrote about using the FireWave in a Mac Mini based home theater. It helped me to simplify my setup quite a lot:
http://www.coulouris.net/av/in-praise-of-firewave.html