Dreamers are often seen this way by realists ... 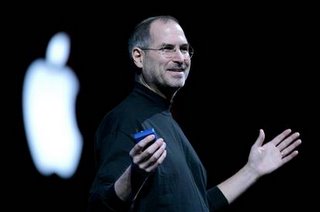 Jobs’s extraordinary marketing savvy and famed reality distortion field leave some people with the impression that he’s a talented fabulist. That’s wrong, though — Jobs, in my opinion, is a terrible liar and a poor actor. When he’s able to convince people of things that aren’t true, or that are exaggerations of the truth, it’s because he believes what’s he saying. The reality distortion field isn’t something he projects willfully; it’s an extension of his own certainty. Remember his on-stage demo last year [of the Motorola Rokr] iTunes-compatible phone? His contempt for the device was palpable; when he failed to successfully switch from song playback to accept a call, he seemed poised to just toss the thing off-stage and cry out that it was a piece of garbage.

But Jobs has actually tossed things off stage before when they didn't work. Not out of dislike for the device, but because of frustration that it worked in rehearsal and not at presentation. In fact, I think he's literally thrown TWO digital cameras off stage that didn't sync right or froze during iPhoto demonstrations.

Gruber is a realist, and an imperical thinker. Like myself, Jobs is a dreamer. And while he may believe something wholeheartedly that isn't yet a reality ... he is one of the few dreamers in this world with the power to make anything he says or dreams a reality.

Jobs is also intelligent beyond measure. Often, intelligent dreamers are doubted by those of us who are par intelligence. Often, a dreamer is called out as liar ... when on the plane of the dreamer it may be more real than the air we all breathe.

I do not believe Jobs is a God and I get slightly perturbed by Mac fans who blindly follow [mainly because it hurts Apple as a company - sudden or accidental death would in turn kill Apple forever with the level of faith everyone puts in Jobs single leadership]. I do hate it when people, such as Gruber, while sensationalist to drive a point in his article, say things like was said in the quote above.

If you watch the video, he tossed it to a guy who's job it is to make it work correctly. I only remember one case with a camera and it took a few seconds before it was tossed back up on the stage fully functional. Not having seen the second time, I am not sure what happened then

I don't think anything Gruber said was sensationalist or even insulting. The word "certainty" is key, I think.

Jobs, in my opinion, is a terrible liar and a poor actor.

What is so bad about saying someone is not good at lying or acting?