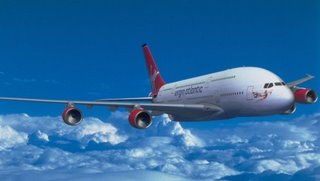 Virgin Atlantic is now the third airline to take issue with Sony's exploding batteries, and is playing it safe by requiring the removal of batteries from all Inspiron, Latitude, iBook, PowerBook, MacBook and MacBook Pro laptops. Of course, that includes a wide swath of laptops that aren't affected at all by the recall, but them's the breaks. Virgin was gracious enough to allow laptop use without a battery -- if you're lucky enough to sit close enough to an in-seat power supply -- but otherwise users of two of the most popular brands in laptops had better bring a book or prepare to acquaint themselves well with a few in-flight magazines.

This is just Branson's way of getting back at Apple for pushing Virgin MP3 players out of the market. I'm not sure if there's any animosity between Jobs and Branson - there doesn't seem to be any friendship though.

Wow! This is complete conjecture stated as fact, and without a citation to back it up in anyway. I guess the other laptop manufactures who are banned are just casualties of the conspiracy to get back at Apple. I mean it certainly couldn't be because a Dell Laptop with a Sony battery caught on fire on a plane. I mean that would be a legitimate safety concern. Good thing that never happened, and this is merely about getting back at Apple.

Point is ... dozens of OTHER laptop manufacturers use Sony batteries that were affected by a recall as well ... HP being one of the most well known ... Dell had to be banned [because of the issue] ... why not the HP laptops that were also affected ... that's why it borders on suspicious.

Here's the most recent:

And by the way anonymous - I can see your IP - you have trolled every article on here for the past 2 weeks. Are you one of the goons?

Humm... Now I am in goon territory for questioning you and am a troll. Nice. If you don't want me to post in your comments, simply ask. No need to get into name calling.

"Anonymous"? Why don't you change your tagline to "NoLifeCoward"? If you don't like the content of this website and so often disagree with it, why do you read it so regularly and take the time to comment? Your comments are juvenile and nitpicking and its time for you to look up the definition of the word "troll." It's not an impressive thing to be, and all you're doing is being annoying.

The author of this blog is being gracious in allowing your inane posts to stay up, but I'm tired of it. No name calling is going on here; you're being a goon and a troll and its being called as its seen.

Yeah, I want you to stop commenting. Either go away or clean up your act. If you're going to keep on, pick yourself an ID so that we can skip over your comments.

Here's another. Where is Virgin Airlines with an immediate Thinkpad ban? Methinks is does sound a bit conspiring.