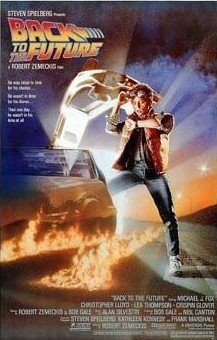 From time to time I like to discuss movies here. I'm a huge movie buff. I'm also very interested to see what role Macs play in movies, both in production and in product placement/set design. Over the weekend I had a thought about movies. Are there any flawless movies out there. Are there any perfect movies? Are there any movies you could show to anyone and they pretty much have to say, "I like it" ... no matter who they are?

This would be a movie that all age groups, ethnical groups, Christians, Environmentalists, Republicans, Democrats, Movie Critics, you name it ... no one would have a problem with the movie.

I thought Shawshank Redemption ... but then I considered that the subject matter and the graphic / adult content put it over the top.

Then, late this weekend, I caught the perfect movie ... in fact it's a trilogy. Back To The Future. It's not too scifi, it's not too serious, it's not too funny ... it's just an all around good series of movies.

Even though MOVIEMISTAKES.COM lists over 300 errors found in the series ... I still think it's some of the best made films ever.

Each movie can stand on it's own, but the first one is still the best.

Some of you may say, Gone With The Wind. Personally I like it, but I do know people that don't and frankly it doesn't meet the criteria because children always get bored watching it (due to it's 4 hour length). Besides, while very historical, Gone With The Wind is very graphic in depictions of war death and injury and a little controversial with the depictions of slavery.

So readers, I ask of you ... not accounting for anything animated ... are there ANY flawless movies that could be universally liked by a 5 year old, 15 year old, 25 year old, 50 year old, and 75 year old would like? I say Back To The Future is the only one!

Fix Your Thinking: The Top 100 Movies Of All Time

[UPDATE] I just received an email from a customer of mine who read this article first thing this morning. He suggested Wizard Of Oz - close ... but I do know people that don't like it. Also, most people have seen the movie so many times they know it by heart and won't always watch it. The case with the Star Wars or Back To The Future trilogies is that there is so much subtle information and scenery, you could literally watch them over and over, back to back.

* A good example. In Back To The Future II Marty McFly (played by Micheal J. Fox) is in a car in the 50's. The radio is announcing sports scores. One of the scores is a Maryland vs Clemson game. That's a very obscure reference. Since I live very near Clemson ... it's something that just hits me as a very neat small detail of the movie.

* Back To The Future Part II shows a Mac Plus in an antiques store window. (In the year 2035)

Surely the movie "The Princess Bride" is another perfect movie. Because it is a fairy tale of sorts, it appeals to children and adults alike and it has plenty of appeal for either sex with a dashing hero, beautiful princess, and a good mix of action and romance.
Add to the mix of appeal the overt and subtle humor. There is plenty of obvious humor and there is also very clever, subtle humor mixed in that provokes discussion and analysis afterward.

There is very little if anything about the movie that anyone would find offensive; it borders on a G rating in my book but again there is enough action and romance to spice the interest of teenagers and college agers alike.

Finally, there are all sorts of morals and lessons interspersed without the preachy, political pandering that pervades some movies.

I would also say that Toy Story fits into this model as well.

I love The Princess Bride ... but it is a little hokey and some see it that way. That is a good suggestion though.

Toy Story doesn't qualify - I'm leaving out all animated movies from this search.

The Princess Bride is confused between trying (very hard) to be a comedy, drama, and a fairytale all at the same time. It ends up being weaker overall due to this schizoid nature.

It's an okay film, but a bit overhyped (partly due to nostalgia). Just my 2 cents.


Back To The Future (the first one) is a good choice though. The latter 2 in the series aren't as beloved...especially the 3rd one for some reason. I like them all nonetheless.