One of those little observations ... 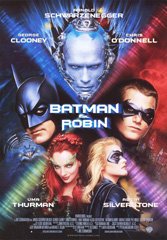 I just caught the END CREDITS for the movie Batman & Robin ... inarguably the worst of the Batman movies. If you recall ... this one starred George Clooney as Batman. Well, I was curious about a couple of the credits so I watched them scroll the screen and I noticed this in the Special Thanks first line ...

Special Thanks To The Following:
Apple Computers, INC

Just in case you want to check the official name