Did You Give Your Teachers An Apple? 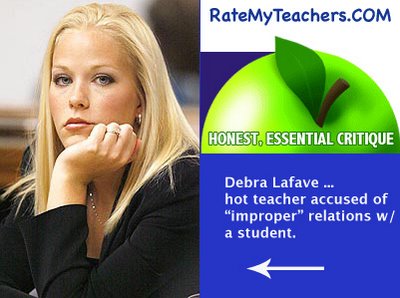 A friend of mine told me about an interesting website:

I found my high school. While a number of teachers that were there when I was 14 years ago, a few have transferred, quit teaching, or retired. But ... the few that I did recognize for the most part got really poor ratings.

My high school in particular had a whole lot of drama going on ... and whatta you know ... a good bit of it centered around me. There was corruption in the booster club, staff were known drug users, and let me just say that teacher/student relationships were not only the norm ... but there were rather unsecret scandals amongst teachers and staff. * My involvement concerned my father suing the school and school district for all of that!

We've been informed the following schools and/or districts have blocked access to RateMyTeachers from school computers!

Are other sites being blocked, or is RateMyTeachers being targeted?

Please let us know if your school is SHAME-WORTHY. We will gladly add site-blockers to our wall.

If I were a parent ... I would be very concerned about my child's school blocking the access to the site. The site does after all give teachers special access and some control over the content if threatening or demonstrably libel.

Any way ... check it out. Just seeing some names might bring back some memories.