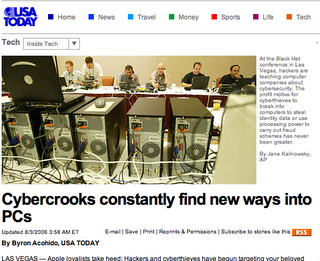 It appears as if USA Today published a story yesterday called:

Here's an excerpt from the Article to get your blood boiling:

Hacking security holes in Apple (AAPL) programs is in an early phase. And Apple owners have yet to experience the full brunt of cyberintrusions all too familiar to Microsoft (MSFT) customers.

At least two Apple attacks have been detected this year: a worm spreading through a flaw in Apple's iChat instant-messaging service and a malicious program distributed via its Safari browser that turns control of the Mac over to the intruder.

Apple, which has been running TV and Web ads touting its immunity to security problems, contends that any threat to its customers is negligible, because the number of known Apple security breaches is minuscule.

"There has never been a widespread attack on any software Apple has produced," says Apple spokeswoman Lynn Fox. "We take security very seriously."

Yet hackers and intruders have taken heed that 25 million Apple Mac users and 58 million iPod owners might be worth some attention. Six of the Apple security patches issued this year have been for vulnerabilities identified in the Mac Safari browser; 16 for QuickTime, the media player supporting iPods.

"People are starting to realize Mac adoption is on the rise, so they're spending more time exploiting Mac systems and Mac software," says Alfred Huger, senior director of engineering at computer-security giant Symantec.

iPod owners who use iTunes and QuickTime media players on Windows PCs may be particularly ripe for attack, says security researcher Maiffret. That's because Apple prompts Windows users to voluntarily install upgraded versions of the programs but does not alert them when such feature upgrades include important security fixes.

Which FixYourThinking readers think it's time for Apple to make a statement ... or do you prefer Apple's "Don't Ask Don't Tell, Just Ignore, Oh Well" attitude on just about all "untrue or unfair" bad press?

Were there really any Apple Attacks? Even Symantec quickly backtracked and said the two instances that arose earlier this year were nothing more than a "proof of concept".

For followup and reference ... look to this story on Fix Your Thinking from March of 2006:

Apple Needs To Give These Virus Drag Racers A Ticket!

As a longtime Windows user (the program not the opening in building walls) there is no fear looming for me at least. Sensible appoaches to the usual carriers of viruses will just become a second nature again, if and when, the Mac platform is targeted by hackers etc.

Like the challenge by JC to write a virus for Macs the actual threat seems to be overstated, but it is not a reason to be complacent - Apple should be proactive on this - the beauty of the Mac OS is it's current no or low virus threat.
When I am asked by friends about switching and I mention the virus point they are amazed. So it is a significant selling point.

And wasn't the iChat 'flaw' due to it using AIM?

The iChat "flaw" was really non existent ... it only infected a few users ... which I tend to think the people that were vocal about it ... created it.

But, you are right ... this is actually an opportunity for Apple to be very proactive. They don't flaunt virus protection as much as they should in my opinion. I say they should make their own Virus software and include in Leopard. Make it a first time collab between Symantec, AVG, and Macfree.

Apple must be working on something which they can release, come the day the 4 Horsemen come galloping down Infinity Loop.

Their own anti-virus software cannot be far away...