Apple Part Of A Witch Hunt? 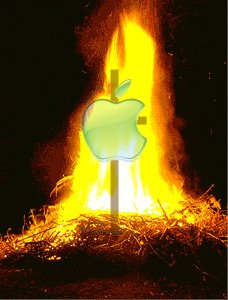 An interesting summary on Slashdot:

"BusinessWeek Online has an interview with Daniel Warmenhoven (CEO of Network Appliances), who joins a growing list of technology executives in saying that the government's search for backdated options among tech companies is going too far: 'It's become a witch hunt. I think the government is looking to find some egregious examples [of wrongdoing] and to publicly hang people for them. That's fine. But where does it stop? I'm not saying the past practices were all good. But I thought the SEC's role was to build investor confidence. What they're doing right now is destroying it, and I don't see the purpose. They're penalizing today's shareholders for events that occurred five years ago. But who is this protecting, exactly? With Enron, every shareholder in the company lost money. The same with Qwest, and with MCI-Worldcom. But I don't know who the injured party is here.'"

I believe this to be a very public throttle of "The iPod Company".

Apple Stock Options Probe Not As Bad As You May Think

The SEC exists to support investor confidence by enforcing financial regulations. It's possible to break a law by committing a "victimless crime", but that does not change the fact a crime is committed The SEC is perfectly within rights to investigate and enforce all such occurences of infractions, and to determine if infractions are committed, whether they be minor or major, and to determine the extent of available punitive measures, as determined by original charter. Regulation is the basic function of any regulatory agency.

Who stands to gain from this? Follow the money. No wonder Steve Jobs looks gaunt.

In case the financial history of the US (and indeed almost every other country in the world) has flown too far below your radar, the basic premise of our econimic system is finding ways to make the wealthy more wealthy. Sometimes this has the fortuitous effect of causing the less fortunate to become richer (ie "middle class") but most of the time those who need it least are the major benificiaries. The folks this backdating of options mainly benefits don't NEED the extra money but they certainly WANT it. And in the end, they always seem to GET it (get it???).

Actually, it might be pretty bad. Check out this report from Merrill Lynch regarding Jobs involvement in the stock options brouhaha. http://jeffmatthewsisnotmakingthisup.blogspot.com/2006/08/when-was-last-time-you-read-something.html
I fear the worst as an AAPL stockholder and fan

Regarding the "economic system exists to make the rich richer" comment: Ludicrous.
Just how much "less fortunate" are the middle class? Steve Jobs didn't come from "privilege;" he came from having relatively little to wealth because of hard work and ingenuity.
What you don't seem to take into account is that stock options weren't (I say weren't because I think most corporate employees won't see them again) a gift - they were an incentive tool to get and keep the best employees. In Jobs's case in particular, there were a couple of years that he worked for $1 in salary and received compensation in stock (not options, if I remember correctly) instead. That's just incentive to do well. It's a pity that the government threw the baby out with the bathwater in their quest (Qwest?) for better accounting practices.

... and whether anyone NEEDS the money is not even the point. Corporations don't compensate based on a person's financial need. Charities do that. Nor do they attempt to redistribute wealth "fairly" in some sort of collective. Socialism does that, and it fails miserably. Every time.

Corporations don't compensate based on a person's financial need. Charities do that. Nor do they attempt to redistribute wealth "fairly" in some sort of collective. Socialism does that, and it fails miserably.

That deserves being quoted ... well said.