And Next Time You Do It Expect More Than A Pink Slip! 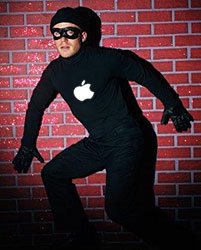 Five Apple Retail Store employees (and possibly more to come) have been fired for downloading Mac OS 10.5 via file sharing. (The versions of Leopard (10.5) that were distributed to developers at Apple's Worldwide Developers Conference two weeks ago.) "Dozens" more employees may also face termination over the same or similar issues.

The former Apple Retail employees had apparently been overheard discussing their "downloads" of Leopard with their co-workers, prompting Apple "corporate" to investigate. The employees were fired after admitting to acquiring the software illegally.

Interviews with a couple of websites indicated that the fired employees knew they broke Apple Non Disclosure and were summarily dismissed ... understanding Apple's reaction.

This means that if you were looking for a job at your local Apple Store ... there might be some openings! 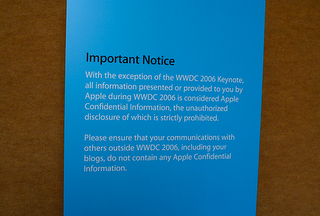 This is a rather serious issue ... does this mean that these same employees might be copying software off of floor model Macs and using it on their home systems? It's one thing to do it ... another to brag about doing it.

This also makes you wonder where some of the blogs around the internet are getting these screenshots and detailed feature lists ... are they getting them from Apple Store Employees or developers that are breaking NDA?

[UPDATE] Found in a forum:

These employees were (hopefully) only trying to get info on the upcoming OS and not profit from the distribution of the "bootlegs".

Ummm ... profitting is only secondary to theft when it concerns breach of contract. The charge for firing wasn't profitting or potential to profit ... it was plainly and simply ... breach of the Apple Store Employees Contracts ... period!

Where is this "firing" alleged? Can you provide a link to the original article?

I'm summarizing from several sources ... I saw it on Engadget and Think Secret, and a few others. I choose not to give Think Secret much credit for anything I post here. In a day or so you should be able to Google for it.

While I don't condone illegal activity, perhaps Apple should offer the carrot along with the stick - a special "10.5 preview" pack for all employees who don't get an actual copy of the OS. Like a DVD with interactive feature demonstrations, learning modules, a copy of the keynote at WWDC where it was presented. Nothing that would be under NDA, but at least enough to make them feel included rather than excluded by Apple.

(Also, given the previous levels of casual copying (piracy?) of Mac OS, it is still, IMO, an uphill battle to convince Mac users they need to be licensed properly.)

There is no excuse ever for piracy and no way of justifying it ... IMHO music is a different situation .... in some situations.