Recently I participated in a phone survey about "Bloggers being journalists" ...

Here are the results (published yesterday):

One-third of bloggers see blogging as a form of journalism

That's interesting to say the least.

One important distinction that can be made between most bloggers and most journalists is bragging. Whenever a blogger states the obvious or inevitable and then said obvious or inevitable product is released or said event occurs ... the blogger will post on his or her blog about how genius they were with their prediction.

And here's where I asked:

Where's the Mouse? Where is the wireless Mighty Mouse from Apple?
* published June 23 2006

Most journalists don't get the opportunity to "follow up" on a news story ... but it is almost certain that if editors and producers would let them - they would. (And brag as most bloggers do.)

Today also marks my similarity to "most journalists" as I bring to you a "follow up" on a story that ONLY this site brought you. An investigation of Bill Palmer and his recent "iProng Name Game Contest"

Did A Popular iPod News Website Fix A Contest?

As you may know I won a prize in this contest. After a long delay in announcing the winners (3 weeks after contest end) and after a long delay (4.5 weeks) of receiving my prize (and being promised said prize within 2 weeks of winners announcements) ... I am pleased to announce that last Wednesday I received my iProng TShirt.

This didn't come without controversy though. Since I feel like the contest was fixed for the top winners to win, I should make a big deal out of it. And while it is statistically possible that I did not win the grand prize of an iPod Nano, it remains statistically improbable that I did not win the grand prize. Further, it appears as if Bill is required by Florida law to publish a list of winners or at least a public notice saying that a "Winners list" is available. I'm not so pleased that FIXYOURTHINKING wasn't mentioned as a winner. (Only as "...and 5 others won t-shirts") 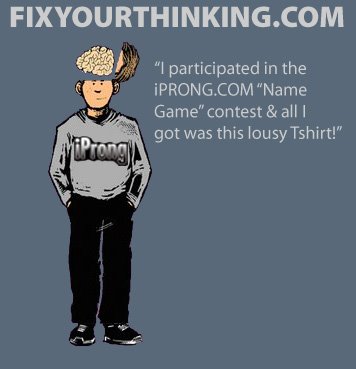 Readers and my own Google searches have provided me with a lot of writing on this topic and I promise a followup with pictures of my new TShirt soon ... I just wanted to wash it first ... for various reasons. 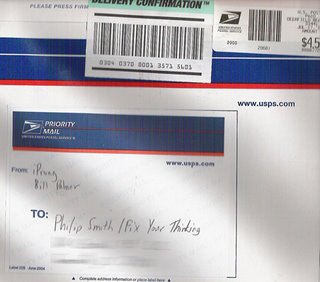 And finally, i'm not getting all Dvorak on you ... I welcome reader corrections and reader insight ... but recently the comments have been filling up with "corrections" that aren't necessarily corrections. See ... the thing is you guys have been used to the normal Mac news outlets only reporting the "fluff" and the "regurgitation" ... usually when I say something I know what i'm talking about as I have researched it thoroughly (as I do with everything on this site). I'm wrong sometimes. Occasionally I'll either mistype a fact or have a date wrong ... and I appreciate the corrections ... just make sure you know the facts before you correct the truth.

"This entire email is off the record and is not intended for publication"
Great way to start!!!

Of course the appetite has been whetted by this - will we get to read the rest of it or shall we just imagine how rude and condescending the founder and publisher of the "voice of the ipod generation" can be?

Speaking of Mice.... check out this link and the "new" products available from MacMice/DVForge via All Spirit in Taiwan and MacPro in California. http://www.macmice.com/

It seems JC is still at work behind the scenes... using others to do his dirty work.... while bailing out on his financial obligations to many people... including his silent partner in Tennessee.... while moving himself and his newest wife (from Ethiopia) to Diani Beach, Kenya. http://dianilife.blogspot.com/

He sold some rights back to All Spirit to settle some debts I believe.

Jack is a changed man I believe ... he's still strange ... but strange / change they rhyme

Well he looks very happy in his new life and his new love is a very attractive young woman - who says love isn't blind.....

I must say from following the links from the Diani Beach blog he must live in a house full of mirrors - he sure loves to look at himself.....


Man, these word verifications are getting tougher - it's like some test!!!

Here is a little snippet for you delectation -

www.zuneprong.com has been registered by a supposed huge fan of iPods and all things Apple and disliker of M$.....

The word hypocrite comes to mind....