Today's History Lesson: Apple AMD ARM ATi & why it could all be a Pain in the "A" 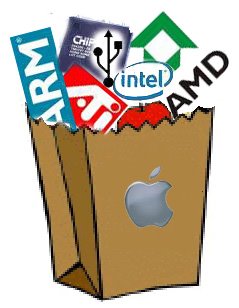 Chips & Technologies made the video chip for the PowerBook Duo ... Apple stopped using C&T when Intel bought them out.

Apple gets mad at ATI over leaking the Daisy iMac ... Apple starts using Nvidia as a "dual supplier" for video card technology in both desktops and laptops

AMD starts to have greater than 50% marketshare

Firewire was dropped from the iPod (around the time it was being rumored and obviously happening) when Intel / Apple teamed up for the new Intel Macs.

Is it just me thinking this or could this be the beginning of a real problem for Apple. I can't see how Apple won't express objections to the merger with the FTC.

Further, I would suspect that ATi holds both Apple and Intel and "combined" intellectual property that is not privvy to the eyes of AMD.

Apple is the only PC manufacturer that is locked into Intel processors.

While I realize Sony makes competing computers against Apple and yet supplies drives and other components of Apple computers, as does Panasonic ... I don't see how the "very public and very backhanded" fight between AMD & Intel could possibly be a healthy one in this particular situation.

Please add your thoughts on the problems this merger could entail in the comments.

For an in depth view of this merger ... visit ARS TECHNICA at this link: ATi/AMD Merger

I'm concerned about how the merger will affect Apple. For some reason, that I'm just not sure of, I don't want nVidia in my Mac. Until recently, I would have liked an AMD chip in my Mac. But it now looks like Intel has AMD beat, at least for now.

I am not sure if this is the case anymore, but AMD chips were running Airport BaseStations when they came out. So, AMD and Apple have worked together in the in past if they still don't. It was also the Cube that Apple got up in arms about not the iMac

Actually he was right and you are right - it was the iMac because if I remember right AppleInsider reported on the release of the iMac G4 which got people interested and then a TIME magazine cover was stolen from the expo floor the morning of. The Cube did have a special video card and was leaked by ATi. The confusion was over the Cube and whether it WAS the iMac or not. Some reports say the iMac G4 was ready at the 2000 expo and Steve Jobs destroyed it. I think Jackwhispers even reported on that here some where.

From what I know ... the Cube and the iMac G4 were the reasons for the "ATi debacle" - it was all over a leak of small form factor video cards and motherboard components. From what I know, the iMac G4 was actually ready long before it actually came out. Somehow, AppleInsider found out this info literally hours before the 2000 Macworld Expo. The iMac was delayed another 2 years. (and redesigned + received faster processors) But it was more of the "2nd screw up" with talking about the iMac G4 "Daisy" before the expo that got ATi in trouble in 2002. This lead to people finding a TIME magazine cover on a Canadian Time Warner website and then the product leaking.

The iMac G4 was released out of necessity, not inevitability or "price of LCDs" as many websites reported.

The question is whether or not Apple truly went with Nvidia because of these events. My bet is actually NO ... but you you never know in the drama of the Mac Community.

ok, i am not trying to correct you, but just asking for clarification on the statement that AMD has 50% market share. Is that in a specifc chip market like 64 bit, servers, desktop CPUs, or is that all processor markets?

It was right at 50% for this past quarter as well. It's pretty common knowledge. Intel is dominant overall because they do more than just PC CPUs , but AMD currently has a small lead.

I guess that makes sense, the article you listed only gave the 50+ as a desktop CPU number, and also explains why that number is at odds with this:

"According to data released from Mercury Research, AMD's market share was able to increase slightly, despite PC processors shipments decreasing by 7 percent quarter-over-quarter. AMD's unit shipment increased to 22 percent, and the revenue share increased to 18 percent - at the expense of Intel.

Despite aggressive price-cutting on its Penitum line of processors, and the new products in June, Intel unit share continued to slip to 73 percent of the market, sending revenue shares down 81 percent."

"AMD was not able to make much progress into Intel's strong-hold: the Notebook market. Intel's share increased from 86.3% in Q1 to 86.7% in Q2. AMD unit share declined to 13.3 percent from 13.6 percent sequentially."