I got a deposit in my Paypal account today as settlement for the class action against Paypal for not fairly disputing transactions.

In my case, I sent $120 to a guy in Canada for a laptop. After 30 days and no shipment I filed a dispute with Paypal, the next day they received a fedex tracking number and closed the dispute. The next day following, I received a brick in the mail. Yes - a brick. This was the case I used in my claim in part of the class action.

I personally have had 3 losses resulting from Paypal. One I was able to recover $54.50. The other, I applied for a Cyno-sure insurance claim and was just approved two weeks back for reimbursement. It will only be $200 - I paid $303.76, but that's better than nothing. The other transaction I lost on, and well, I learned a lesson ... don't accept email offers. I sent $120 to a "Canadian" - no shipment received in 30 days - I filed a Paypal complaint - he typed in a tracking number - that appeased Paypal - I received a brick via FedEx. Yes folks, a brick!


That said, I have saved COUNTLESS amounts of time and money with the conveiniance of Paypal. I can also instantly refund money with little hassle. If you don't use Paypal, you're an idiot in my opinion.

My total losses from Paypal have been about $170.00 ... the settlement was obviously less than that with the difference going to lawyer's purses. 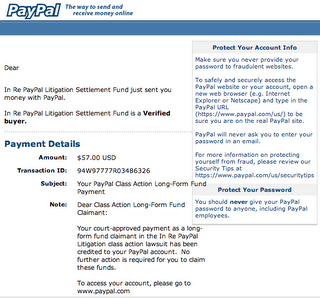 I wanted to provide a screenshot of the email so you wouldn't think it was a phishing scam.

Was that the latest iBrick you were sent?....

The cyno-sure financial for yahoo.com
cannot read their own claim form
online, but need it printed out for
a hard copy to mail it to them to
read. I have waited over 45 days
and cyno-sure financial will "let me
know of their decision. I feel as though I've been double scammed
once by the scam auction and twice
by the buyer protection program.