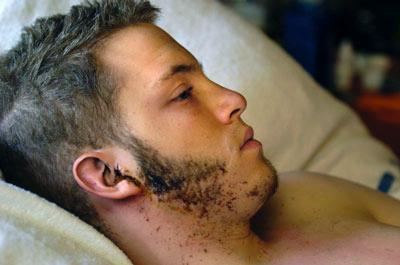 Here's a couple of headlines to keep you occupied over the weekend that I don't feel need any further comment but are interesting & fitting to this site's typical news coverage and commentary.

Apple explains dashboard "notifying Apple"
Bloggers discovered that a new feature in last weeks 10.4.7 update notifies Apple of what you have installed in your dashboard widgets. They should have just made this clear from the beginning.

Apple and Creative to settle on creative differences?
Creative & Apple Open to settlement ... I think this was more speculation and good will portrayal than actual fact

A guy gets struck by lightening - did his iPod act as a lightening rod?
This story is just bizarre and freakish ... look at the picture!

Despite his mother blaming the iPod...

The guy was using a motorized lawn mower while a lightning storm approached. Not the best idea.

And so thusly comes a report today that a doctor says you shouldn't wear your iPod in a rain or lightening storm.

The real suggestion should be ... you shouldn't be out in a rain or lightening storm ... especially with a large metal object (ie lawn mower) in your hands.