A distorted headline: Was Apple "Anti-blogger" or "Anti-theft"? 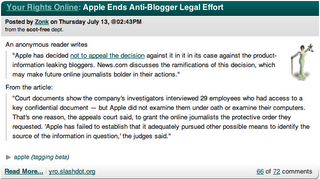 * screenshot of headline from SlashDot

Apple never had a case that was "ANTI-BLOGGER" - the case was "anti-theft". Apple chose the wrong path to pursue in prosecuting this case. Instead of going after the websites based on whether or not they were journalists or whether they should go after the bloggers or the ISPs ... Apple should have pursued the fact that NO NEWS OUTLET can post trade secrets.

This case was ruled purely on technicality. The courts used to look at all evidence and surmise what was right and what was wrong. Now, attorneys (such as those from the Electronic Frontier Foundation) exploit the law and the system.

Other headlines gathered from MacSurfer:

"No Appeal for Apple in Leak Lawsuit: In May, a California state appeals court ruled that online journalists have the same right to protect the confidentiality of their sources just as journalists in the offline world." CIO Today

"Apple halts mole hunt: The search for the Apple insider who leaked upcoming product details has been abandoned" CNET News.com

Actually if they had proven first that the bloggers or ANY journalist had done something illegal then they could have proven that (following that theme) they should be forced to hand over the information because of establishing the information was stolen property and therefore covered under the UTSA.