Something from the archives that never got published ... 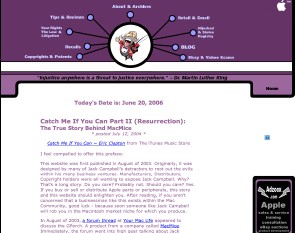 I have just finished backing up and deleting all of the old Jackwhispers website. (The former name of this site) I had transferred the majority of the old site to this blog which registers under jackwhispers.com and fixyourthinking.com back late last year. 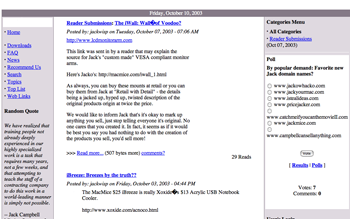 This site started in August of 2003 to follow the day to day "activity" of Jack Campbell, the former head of MacMice/DVForge/et al. It was originally started by an unknown entity who still somewhat remains anonymous to this day ... although I have my ideas. The first day it was published, I was sent an anonymous email saying I was editor at a website called Jackwhispers.com. I jumped at the opportunity to write. It had been a while since I had gotten some form of recognition for writing beyond high moderation on Slashdot.

I had always wanted to do a site like this ... and before I started Jackwhispers I had a Slashdot journal (precursor to BLOGs). I wrote in it from 1998 to 2004 discussing a range of topics, but mostly relating to eBay and Apple.

Now a new chapter begins. Jack Campbell is no longer a threat to the Apple business and consumer world. In fact, I would say he's a changed man. Thanks to me? Who knows!

I feel this website has the potential to grow into something much bigger some day. I have broken many stories and expanded on the news behind the news in the eBay and Apple communities.

I hope you like the direction this site has taken ... help me to continue to spread the word.

Email ThisBlogThis!Share to TwitterShare to FacebookShare to Pinterest
: Fix Your Thinking