There Go The Hopes Of A New Newton 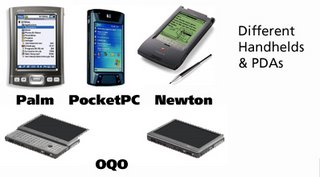 How ironic a development can this be?

Apple ends production of its pioneering PDA; the Newton, stays afloat in lean times by selling its shares of ARM (the processor producer that made the chips and technology used in the Newton) to Intel, Intel restructures ARM into XScale. Apple starts to use Intel chips; Intel sells Xscale.

Honestly, after analyzing the PDA market further ... I saw the hopes of a new Newton fade in favor of an Apple iPhone. It is highly probable that Apple's iPhone will have PDA functionality ... obviously it will have to interface with an address book (moreso than the iPod does now). It is also probable that the Apple iPhone will have a high end (but low power) processor in it so it can handle the feature set that it will have and potentially handle high end peripherals as well. I don't think the XScale/ARM processor (which is RISC based) fit in with Apple's processor roadmap or its processor requirements for future devices.

I think Apple wants to program and produce for Intel chips (CISC) and move away from PowerPC (RISC) based chips.

Check out this article. It's worth reading...
'Intel ditches mobile phone processors'

Some article excerpts:
Intel will sell its XScale PXAxxx applications processor and 3G baseband processor businesses to Marvell for $600 million, plus existing liabilities. The deal could make Marvell the top supplier of 3G and later smartphone processors, and enable Intel to focus on its core x86 and wireless LAN chipset businesses, the companies say.
[...]
The Marvell deal does not affect Intel's XScale-based IXPxxx and IXPxxxx network processor lines, nor its XScale-based IOPxxx storage processor line. In addition to PXA-series applications processors, the deal does include Intel's baseband processors for UMTS, HSDPA, and other 3, 3.5, and 4G mobile phone technologies.


Also, if you care to...
Check out the related Slashdot comments sometime for some interesting notes and/or responses.