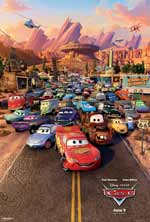 Back in March, I mentioned that I thought Cars was going to be Pixar's least successful film to date. Well, if a 19 million Friday is any indication, then I may have been right. I went to see a matinee of the movie with a >5 year old child. Here are some of my thoughts:

The theater for the matinee was packed, moreso than when I went to see Over The Hedge. Good thing? Most likely. But, in general these movies are all packed their first weekend.

Here's an interesting detail about most Pixar movies vs. most Dreamworks & Fox Computer Animated movies: Cars is rated G. Over The Hedge is rated PG. One thing I have always noted about Pixar's competition is that they ALWAYS relegate to "potty humor". Pixar almost never makes references to passing gas, burping, or cursing. Does this translate into a bigger audience?

One other comparison I wanted to touch on is the absolutely amazing computer graphics that Cars had. When I was sitting in Over The Hedge my best friend and I commented on how incredibly lifelike the animals looked and that finally Pixar had met it's computer generated match. Not so. No detail is left out in Cars. It's nothing short of stunning. Many of the backdrops you will THINK are real or "computer enhanced" rather than computer generated.

Now comes the bad. I have a tad bit of ADD. It's very hard for me to sit still for more than 30 minutes. I wasn't the only one. The under 10 crowd that was in attendance, including one that was with me, was incredibly fidgety and squirmy. Many kids were saying they wanted to go home. I didn't hear that at Monster's Inc, Toy Story, Finding Nemo, or The Incredibles.

This is the 1st Pixar movie to date that I did not see opening day at the earliest time possible. I just wasn't as interested in it as I have been in past Pixar films.

I recommend it ... just make sure that if you take your child that they are well behaved and fed ... because, while my child was ... others were not. I would consider going to see it later at night so as to avoid the "kiddy crowd".

This movie will not do as well as Finding Nemo.

As always, make sure you stay after the film to see some "extras" and "outtakes" - the John Ratzenberger bit is so funny and so "Cliff Clavin".

[UPDATE] Cars made 63 million its opening weekend ... the least of ANY Pixar movie since A Bug's Life in 1998.

I saw the movie and thought it was good. However it did not have that "Pixar" sentiment that I usually notice that set it appart from the other animated features that are released. I thought the animated short before the movie was more in line with a "Pixar" creation than the movie. I was a little disappointed because I had been looking forward to this movie for a while. I have children and while they enjoyed the movie they were not as enthralled with this film as they have in the past. I felt that the story line was a little above most small childrens heads and that it was geared more toward an older audience.I think it will do "ok" because of the Pixar name but it held no more appeal for me than any other animated movie that has come out recently.

I just got out of seeing Cars this evening and it was nothing short of super-fantastic. I cannot believe that anyone leaves the theatre thinking that it was anything short of great.As mentioned, the graphics and detail are many levels above any of Pixar's competition as is the overall structure of the film. This is a FILM,with all of the location and production values of a large feature film whereas other animated features feel more like studio backlot creations.

It's not a laugh-a-minute kind of movie like Toy Story and that should be reflected by the cast. Its not populated with comedians and jokesters like many of the animated films it may be compared to. A notable exception (and great addition to the cast)was the Larry the Cable guy character Tow Mater.

The car racing scenes rival the best cinematography done in an actual racing movie and I'm frankly surprised that NASCAR hasn't sponsored this film or that more of a connection has not been made with this audience.

It is not simply a KIDS movie. It is a FAMILY film that is going to have the most appeal to older children and adults. There's plenty to enthrall a younger child but not like a Toy Story or Finding Nemo.

The story line is GREAT. The Route 66 theme is really compelling and you leave the theatre with an "at peace with the world" feeling that these stories tend to bring.

Anyone that hasn't seen it already needs to see it asap. My prediction for this movie is that it is going to be a steady earner for Pixar for several weeks rather than spectactular box office the first weekend.