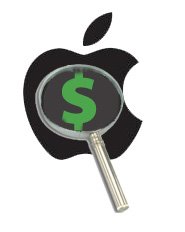 Apple issued a brief statement yesterday stating: "an internal investigation has discovered irregularities related to the issuance of certain stock option grants made between 1997 and 2001," reports The San Francisco Chronicle. One of the grants was to Chief Executive Officer Steve Jobs, but it was canceled without resulting in financial gain to the CEO, the statement said. "About 50 companies, a third of them in the Bay Area, have disclosed that they are being investigated by the SEC or law enforcement agencies for their options practices," notes the story. "The companies are suspected of manipulating their option grant dates to make them more lucrative to executives and other employees. Most of the companies under investigation aroused suspicion because they granted options at propitious times. If the companies broke any laws or regulations, they could be forced to restate their financial statements and pay back taxes, fines and penalties. If fraud is involved, criminal charges could be filed."

"If the companies broke any laws or regulations, they could be forced to restate their financial statements and pay back taxes, fines and penalties. If fraud is involved, criminal charges could be filed."

Dozens of corporations, including Microsoft, Intuit, and Computer Associates, have announced that they are reviewing their option practices, which have come under increased scrutiny since enactment of the Sarbanes-Oxley corporate accountability law in 2002.

From The Financial Times:

Apple did not detail the "irregularities" and said executives would refrain from commenting until the investigation was concluded. "Apple is a quality company and we are proactively and transparently disclosing what we have discovered to the SEC," said Mr Jobs. "We are focused on resolving these issues as quickly as possible."

Note that MacRumors gave the full story ... Apple didn't really do anything wrong per se they may have misreported these stock options under a law that was enacted AFTER the alleged took place. The Sarbanes-Oxley corporate accountability law is retroactive in certain aspects and was essentially enacted due to ENRON and MCI.

I hate the word "if" in reporting. And The San Francisco Chronicle uses it a lot.