The Five Things All Mac Users Want To See (And Are Coming Soon, So Be Patient)

The Five Things All Mac Users Want To See (And Are Coming Soon, So Be Patient): 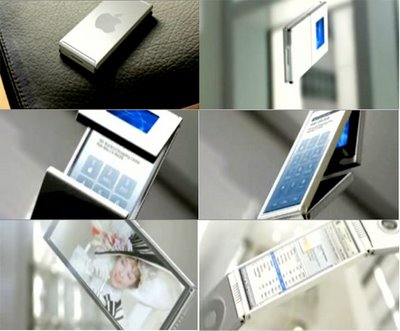 The Mighty Mouse (wireless): I made the case for this here, but to sum up ... the biggest reason is for a mass distributed wireless right hand / left hand interchangeable wireless mouse. A mouse that you don't have to worry about which side of your laptop is free to plug it in, or to have some (two port hogging) dongle protruding out of a USB slot. Bluetooth mice save ports, save hassle, and you don't have to worry about "port strain". * port strain is accidentally yanking on a corded peripheral or a cable and causing damage to an i/o port.

The Apple iPhone: It's coming. It has to. Apple is truly starting to get real competition coming from cellphones for the iPod. The cellphone industry is in the exact same place as the MP3 industry was when Apple entered the MP3 player market ... crowded and about to be moreso ... but no one was stepping up to the plate with a really good solution that was simple and (bigger than you think) was compatible with Macs. The only downside I see to an iPhone is that (unlike the MP3 player market) Apple will have to choose a carrier and thereby not be able to tap in to a full market. But here's the interesting part. You have to know that cell carriers see the potential that an iPhone would have on subscriber base. Geeks by the droves (droves = 100's of thousands) would switch to the carrier that Apple chooses to distribute the iPhone. I would imagine one or two carriers has already given Apple R&D money to gain exclusivity and been planning for the massive influx of subscribers for months now. My bets are on Cingular ... because of the "easy ownership" of phones. A Cingular GSM (or SIM chip) phone is not tied to a network like a Verizon or Sprint phone is. Technically, a Sprint or Verizon phone never belongs to the owner because it requires interaction with a Verizon/Sprint store to reprogram it. Whereas for Cingular, SunCom, and T-Mobile all one has to do is put their SIM card (a small ID and memory chip) into any compatible phone. Apple has also worked with Cingular in the past ... I suspect they will do so again. Then again ... Apple may choose a new route startup cell companies are taking ... becoming an MVNO (Mobile Virtual Network Operator). This entails Apple actually setting up their own service and just leasing air time from a larger carrier. This route is quite possible with the penetration of Apple Stores across the country at this point. MVNO seems just as likely seeing as how Apple likes to control "the whole widget" as Steve Jobs has said in the past.

The best thing that Apple will bring to the table for a cellphone will be a high quality digital camera ... finally re-entering the digital camera market and doing a cellphone/digital camera right without compromise. 4 megapixels instead of 1.3 or 2 that is common on phones now. I don't want Apple to rush it, but it seems like they are being overly cautious of timing this announcement. An Apple iPhone will be a hit on so many levels ... finally appeasing Newton fans, giving Apple users a quality digital camera, and letting the world see Apple can do things right ... a fourth time. (Mac OS, iMac, iPod, iPhone)

And finally ... I'm going to cop out on the last of the five and see what you have to say. Remember ... this isn't what YOU want but you think ALL, or at least a high percentage of Mac users, need or would benefit from. Tell me what you think in the comments.

* Apparently a draft version of this story originally posted ... it has since been corrected.

You asked for a major CAD system to come to the Mac platform and *BAM!* the top software (IMHO) in the field of high-end CAD and associated software answered:

Now, if you can just asked Apple to include a web page template in iPhoto that lets your readers order prints online, I'd appreciate it.

"There are solutions now, but none with true prestige such as the industry standard AutoDesk's AutoCad."

The Mac is an excellent CAD platform. Perhaps you have no experience with Nemetschek's VectorWorks, which is a very powerful 3D CAD solution that is much easier to use than AutoCAD. Just because AutoCAD has the largest market share doesn't mean everyone has to use it, or that it's the best solution for all CAD professionals. VectorWorks is also cross-platform, so it's great on both Macs and Windows. I don't work for Nemetschek, but I do use VectorWorks (on the Mac), and it works well.

anonymous #1: like I said in the title (these things are coming) ... thanks for the link ... I had not seen that

anonymous #2: Like I said, there are solutions now ... I am aware of Vectoworks. But AutoCad being Windows only has this stigmatic thing about it .

Thanks for the insight.

I'm with you on the Mac Mini "Multimedia Edition" ... the tablet ... maybe

A good GPS/mapping program would be nice.
How about a home design/layout program with cool 3-D flythrough taking advantage of Core Video? The Mac is supposed to be a consumer machine.
I'd like to see better integration with other consumer technologies like TiVo
How about a simple home integartion platform with hooks for automated lighting and sprinklers. X10 is too clunky. It would be nice to check into my dot.mac account on vacation and see that my sprinkers are cycling and the house thermostat wasn't left on.
I'd also like to see greater compatability and quality in iChat, as noted above.

VOICE RECOGNITION!!!!
Of all the technologies that should be so much farther along (in my opinion) voice recognition is chief among them. There isn't even any decent VR software out for Macs (or PC's really). IBM's ViaVoice? Ha! I would like to see Apple intergrate VR into the OS, allowing users to work superfast between keyboard shortcuts, voice commands, better mice, etc. Imagine the possibilites of voice recognition done well and built right into OS X. Someday hopefully...

"A good GPS/mapping program would be nice." ... instead of asking for #5 I was really close to putting this. I think GPSy is pretty good, but there's nothing on the Mac quite like there is on the PC ... I just couldn't predict any of that with certainty that it is coming to the Mac.

The IPhone may be the solution ... many cell carriers are doing a type of GPS that locates you via cell tower triangulation. Verizon's is called VZ Navigator

Oh please let the phone come soon. I have been waiting for 6 years. I would love for it to be able to run apps that are made for it. I would love iChat, photos, music, video. PDA, mini computer would make it take the market. All of the PDA phones are trash. We need something with and apple on it

Adium X is an excellent 'multi-protocol IM client' for OS X. It supports messengers for AOL, MSN, Yahoo, Google/Jabber, ICQ, and plenty of others. I use this one instead of iChat. As a bonus, you can customize the heck out of it, if you want.

Proteus, Epicware Fire, and some others pretty much do the same thing (on Windows, my friends use gAIM or Trillian).

I understand you want a new one for just Yahoo only, but I think the alernatives look (and sometimes even work) better. Plus, it's more convenient having all of your messengers in one app. Ad-free.

Actually if you read ... you'll see that I want Yahoo Messenger iChat AV (webcam) support. More and more people are fleeing from AOL and those with .Mac accounts are few and far between. I know WAY more people with Yahoo IM than AOL IM.

And by the way ... I already use a multi chat client ... Fire ... but your suggestions are good too.

I think people want to see a home media box/dvr that links to a movie store. And links wireless to the airport network/mac/ etc.