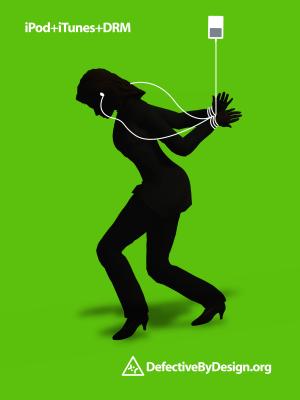 A group called Defective By Design is planning a protest of several Apple Stores tomorrow.

Defective by Design (DBD) is planning a protest at many U.S. Apple Stores Saturday, June 10th at 10:30am.

The protest is against Apple's DRM which makes it possible to purchase music legally via iTunes and listen to it on your iPod and up to 5 computers.

DBD has made similar protests against other forms of "Digital Restrictions."

During protests we show up in yellow Hazmat suits and inform passers-by of our cause.

As an experienced protestor ... Apple don't mess with em, but if they get out of line, are within 15 feet of the front door, harass customers in any way, or do not have a permit for EACH protestor, then PLEASE don't make a scene, but call the proper authorities.

My opinion ... the name alone, of this protest group, could be construed easily as defamation. It implies that Apple is producing defective products.

What a crock ... yet another group tipped off ( and most likely anonymously donated to) by Apple's competition!

It's easy throwing stones but much harder solving social problems. Unfortunately, FSF is good at solving technical problems in which nurds take an interest. But in the area of DRM, they fail to provide a viable solution that all parties (commercial and consumer) can live with. Not all solutions can be solved by socialistic ideals.

Rather than trying to tear down iTMS, which arguably has a small market, FSF should try working with the music industry to figure out a better solution to DRM.

Instead they're pulling a childish stunt appearing more intended to get attention for themselves.

Well, comparing iPod's DRM to the freedom you get from a not so old-fashioned Mp3 Discman, it does feel defective.

anonymous (for a reason) said: "Well, comparing iPod's DRM to the freedom you get from a not so old-fashioned Mp3 Discman, it does feel defective."

I didn't think anyone from ANYTHINGBUTIPOD read my site.

jhg said: "But in the area of DRM, they fail to provide a viable solution that all parties (commercial and consumer) can live with."

And that is the issue. At the very least Apple should be applauded for giving SOME solution to have hi capacities of music on the go and on our computers that the RIAA won't sue us over.

Are you guys planning to protest Microsoft - seeing as 97% of the computers in the world are running Windows + Windows Media - which also has DRM in it?!

Apple still lets you burn to a CD and re-rip it back into iTunes. You can strip the DRM that way if it really bothers you that much.