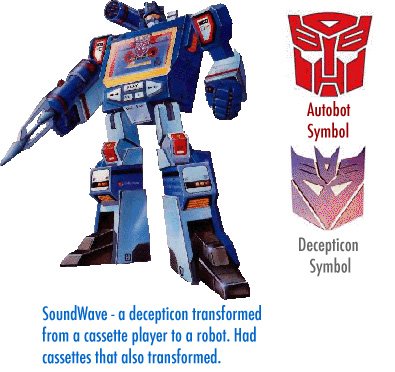 Speculation of the characters for the Summer 2007 live action version of The Transformers is running strong on the internet now that filming has begun. One recent rumor has surfaced that the Apple iPod and the Microsoft Xbox 360 will be starring as some of transforming robots.

I hardly think Microsoft would bless or even accept the portrayal of "being evil" - this would be intentional and defaming on the part of the director and producer - in a world of political correctness a studio wouldn't take this risk.

The Decepticon "SoundWave" was the only "audio device" in the original cartoon.

From what rumors I've read, "SoundWave" is going to be an AWAC airplane with a radio transceiver/signal tracker/jammer on top rather than a cassette player as in the original cartoon.

I'm not a complaining fanboy, but I don't understand why the director is choosing modern times to set this movie in ... it's okay to still set movies in the 80's ... the 80's had so much more pop culture.

[UPDATE] I answered this question in the MacRumors forums:

This is strange.. thinking back I never really understood transformers...
why in hell would a flying, ass kicking robot transform into an 18 wheeler...?

If you watched the pilot episode: they crashed on Earth 1 - 5 million years before the cartoon was set (the 1980's). As the story goes, something minute triggered a probe to go out and find objects (containing metal) and sources for metal to repair the damaged robots. The best fit (for Autobots) were cars because they were transporters of "energon" and couriers for the planet Cybertron. They were also security gaurds and centrys (police cars).

The Decepticons on Cybertron were often weapons and war devices. IE ... why they became guns, strike planes, tanks.

They found out that they needed to remain invisible so as not to disturb the planet and possibly prevent their quest to find energon (on earth) ... so they remained cars and weapons so they would go undetected by humans.

I feel very geeky knowing that the info above takes residence in my brain.

I'll see your Transformers posting, and raise you a parody video...

Rats...YouTube took the video down. It was fun while it lasted.