MI3: Tom Cruise's 1st Movie Without A Mac Or A Plot 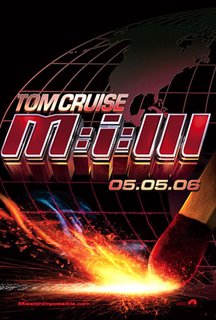 I had high hopes for Mission Impossible III. I was looking for it to be one of the "summer blockbusters" ... turns out it's just a bust. Very uninteresting storyline ... wannabe M. Night Shyamalan-esque "everything ties up in the last 10 minutes" twist and just another example of how crazy Cruise has become.

My best friend made an interesting comment about Tom Cruise movies and it certainly played true in this movie ... Tom Cruise doesn't play a role ... he plays Tom Cruise. While he may have gone by the title Agent Ethan Hunt in this movie ... he certainly could have answered to the name Tom in every scene. It's like he has a random cliche generating device implanted in his head, squints his eyes and speaks in an almost spitting wide open mouth grunt for every line just to get a light sparkle off of his pearly whites.

The story basically follows Cruise being set up by IMF agents and uncovering an even more sinister conspiracy theory spearheaded by Phillip Seymour Hoffman's (well done) portrayal of a bad guy.

If you haven't seen the preview ... it definately makes Hoffman look like he has a great scene intimidating Cruise. Turns out ... this scene has good dialog and delivery by Hoffman, but it's just the other way around ... Hoffman is being intimidated by Cruise. (Check out the trailer to see what I mean)

The action sequences in this movie look like excerpts from The Matrix, True Lies, and Bad Boys rather than original stunt coreography.

One interesting thing to note ... this is the first movie set in the modern age starring Cruise that hasn't had a single Apple product ... not even an iPod is visible. (Macs were featured prominently in the first two Mission Impossible movies.)

Also noteworthy, I went to an 8:00PM show ... the theater was only half full.

Wait for this one to come to TV ... it's not even worth renting.