Ok Apple ... marketshare is being handed to you ... carpe diem!

Maybe this will bring on an influx of new hardware enthusiasts, along with plenty of horror stories about attempted computer assembly. Do you think this will have an effect on the OEM parts market? And what about the operating systems to be offered? Will Wal-Mart shoppers migrate to Linux in order to save a hundred bucks or more, or will they even have the chance?"

This seems like a golden opportunity for Apple to promote "Leopard for Losers":

Wouldn't you want the shelves to look like this: 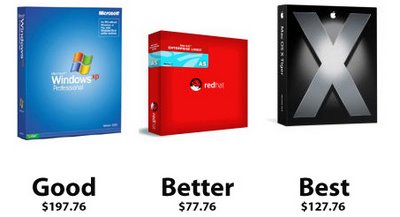