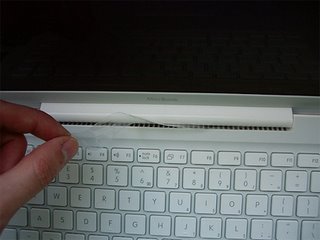 Anyone who's given a PowerBook, MacBook, or MacBook Pro a good look probably knows how the ventilation system works: two inlets near the front of the computer draw the air in, a big vent grid underneath the screen hinge lets it all out. Ideally. Except Gert Stahl apparently discovered a thin layer of plastic film in his MacBook that prevented airflow, and was causing his machine to overheat; removal promptly caused his fans to shut off and the machine's heat to return to a level more manageable. What's more, apparently there was never any mention made in the manual about the removal of any such film, leading one to believe that this might be unintentional (read: manufacturing error). So, if you've got a MacBook and it's a little toasty, check that gap out for the thin plastic strip ...

This is a relief ... I just ordered a MacBook Black because I presumed the MacBook was more of a MacBook Pro 2.0 release ... corrections were made and there were would be no outstanding problems. When messages of fan whines and overheating surfaced a few days back I started to get worried and made plans to sell my Macbook when it arrived. I'll rethink that now. The film was on my shipment as an FYI.