Let's Just Ban Children From Schools While We're At it 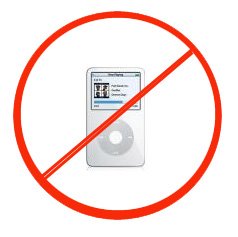 Ya know ... I honestly wouldn't be surprised if children were banned from schools next. Even though this is in Ireland, it's very obvious that this is something that will be considered in the USA next. Note how that, at first, the ban seems somewhat reasonable then the exposition by the principal just moves into the absurd.

A story on Scotland's The Herald today reports that one Scottish teacher's union wants iPods banned from schools. "The NASUWT annual conference in Peebles heard that use of gadgets in class created a persistent problem of low-level indiscipline," teachers said yesterday. Scottish president Bill Scott goes even further and says that make-up should also be banned. "No-one needs games or musical gadgets. Rather than spending money on an iPod or a make-up bag for their children, parents would do better to give them a pencil case." Along with iPods, the union wants mobile phones and other electronic devices banned.

Under the Duke University Digital Initiative ... students actually receive iPods as part of their studies at Duke. The iPods are used to record lectures,receive and listen to podcasts from professors, and as data backup and data/project transport.

As far as cellphones ... I have seen a really creative way for kids to use cellphones in classrooms as Bluetooth buzzers and text messaging answers to the teacher in a contest. Phones are collected during tests.

I used to put a [cassette] Walkman in my backpack so I could listen to music on the walk to and from school. Thus I think outlawing iPods entirely is a bit much. On the other hand, I also know they aren't necessary for learning either.

My thoughts are this...
Just as long as kids don't get caught using them during class, who cares if they have an iPod.

Anything that is abused by the children can just be taken by the teacher until the end of class (or the end of the day)...like, for example, a paper football would have been when I was in grade school.

Unless you work in education you have no idea.

Kids are in school to LEARN. Not to listen to their iPods or Creative Zens or other DAP. Unfortunately iPod is now a catch all phrase for any DAP.

There is absolutely no excuse for kids not to be giving 100% attention to their classwork. Sitting listening to music is only valid in the music classes.
I am fed up hearing kids bitching about how their teacher took their iPod away because they were listening to it in class.
D'Oh, even Homer would be able to figure this one out.....

And phones - ban them too. Is your life so important that you have to be talking to your friends 24/7? Or maybe you are the top exec in a multi-billion dollar business and you have to be contactable where ever you are?

Save the gossip until you leave school premises - maybe the novelty of sitting on the bus talking to your friends instead of being locked up in audio fantasy world might improve your social skills.....

...and didn't I read somewhere that the Duke iPod 'initiative' was a complete flop?

The students were just loading their songs onto the iPods?

I suspect that it was all a publicity stunt to get Duke press coverage so they could increase student numbers?

When I was in high school ... I had 2 classes I could away with anything ... in one I couldn't even doodle on my notebook paper.

Surprisingly, now that I reflect back ... I learned a lot more in the class that had the strictest teacher ... the one that was in control.

No, the Duke Digital Initiative has been an immense success ... the rumor of its failure was most likely spread by Creative ;-)