Disney Gets Unhappy ... Will Apple Be Unhappy Too? 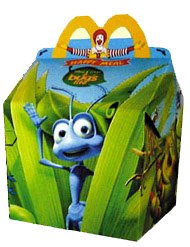 While a few websites are reporting that Steve Jobs is the reason Disney isn't renewing it's contract with McDonald's for "Kid's Happy Meals" ... I find that hard to believe.

Licensing is the major force behind the profits that Pixar pulls in. You can also be assured that the report below is not only false speculation (posted by Jason O Grady on ZDNet) but most likely signals an even larger push into fast food or possibly even restaurant licensing.

Even though the article below gives some details about Jobs that I didn't know ... it is poor analysis.

I would imagine the next McDonald's Monopoly game will offer iTunes songs and iPods from Apple ... meaning Jobs loves the licensing of anything. It is a key to both Pixar and Apple Computer's revenue.

Apparently Steve Jobs doesn't care too much for the food at McDonald's or at minimum he wants to stop using it to promote Disney/Pixar films to kids.

According to a story in the L.A. Times, Disney is not renewing a 10-year agreement with McDonald's to include plastic toys in its Happy Meals:

Disney is not renewing its cross-promotional pact with the fast-food giant, ending the arrangement with this summer's release of "Cars" and "Pirates of the Caribbean: Dead Man's Chest."

The word is that Disney is trying to disassociate itself from high calorie and trans fat laden fast food peddled by fast food giants like McDonald's. Times staff writer Rachel Abramowitz finds the timing the contract cancellation (reported to be worth US$1 billion to Disney) less than coincidental. It happened just as Steve Jobs becomes Disney's largest shareholder after the acquisition of his Pixar Animation Studios.

During a conference call last year; Jobs, who is a pescetarian (neither vegetarian nor vegan), said "there is value" (in fast-food tie-ins) "but there are also some concerns, as our society becomes more conscious of some of the implications of fast food."

[ Jackwhispers: Jobs may have said this, but he also said we wouldn't see a Video iPod either ]

Health concerns haven't stopped less obesity-conscious studios, though. DreamWorks Animation SKG has already jumped in to replace Disney in promotional tie-ins with McDonald's for "Shrek 3" which is due out next year.

I doubt seriously that Disney will just give up 1 billion in revenue ... seeing as they have to recoup 3.4 billion just to break even with acquiring Steve Jobs.

Yes, the original feature was tieing a lot of random facts together and calling it analysis. While SJ might be a vegan, the Apple caferteria serves meat so one does not have anything to do with another. Of course, if given a choice, SJ would prefer that a tie-in be with a non fast food company but face it - you don't sell $6 BILLION dollars worth of animated boxoffice by not marketing to them.

The real truth is the deal was signed at Disney animated zenith (Little Mermaid, Lion King, Toy Story (distributed by), Beaty & Beast, etc ...) it was quite a coup - to lock up McD's (the largest & most kids) of all the fast food companies - and of course, McD was ahppy to lock up Disney so there wouldn't be some money haggling every year but then of course, things went downhill for Disney in their animation dept. Mcd was certainly not happy that movies became Home on the Range and treasure planet ... and of course, Disney is sensitive that McD is taking a PR hit with the obesity thing so the end is really a welcome relief for both parties.

Now, McD is free to work with others and Disney can pick & choose an appropriate party when necessary - it might be McD for something like CARS but with RATATOUILLE (about a Parisian rat) coming up with Pixar - maybe a restaurant is not the best tie-in :-)