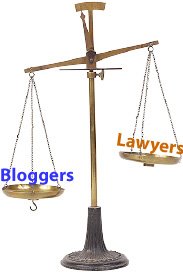 It appears that a disturbing trend for business is developing: Sue if you are upset that someone complains. Fortunately, the courts see this for what it is ... trying to stifle free speech and a bully tactic by big business on the little guy consumer or little guy writer.

Have these businesses never read David & Goliath from the Bible?

While I personally do not enjoy the vulgarity of TUCKERMAX.COM ... I certainly believe the guy has the right to write what he wants to.

Tucker Max wrote a scathing article on his website (a blog) about a really bad experience he had with a local publicist and party coordinator Anthony DiMeo. Comments within his forum, which he allowed to stay and even responded to were met with rebuke from DiMeo. DiMeo sued for defamation.

This is all being taken far too personally. The law is the law. By definition, a statement cannot be defamatory if it is made satirically - which is precisely what the judge and anyone with two functioning brain cells would conclude by a visit to Max's website. Also, the First Amendment's guarantee of free speech clearly bars prosecution of an individual simply because the RECIPIENT of a statement believed it to be offensive. There is no right not to be offended by speech, and such rights cannot be created by statute without violating the First Amendment (generally).

To paraphrase Justice Holmes, the cure for stupidity is more discussion, and more speech, not censorship. Personally, I think Mr. Max's site resemble's the situation of Henry Miller's book "Tropic of Cancer." It was banned in its day, and read mostly by WWII veterans returning from Europe, but it became the rallying point for a Supreme Court case affirming the proposition that speech cannot be banned merely because it upsets someone. I have no sympathy for people who anonymously generate death wishes - if they had any wit at all, they could do much better. But, Mr. Max does not fall into that category, and above all, his writing has a great deal of merit in its own right. It's always sad to see a unique talent being attacked - fortunately Mr. Max is not deterred. Nor should he be - despite his vulgarity, his viewpoint has a lot to offer.

I'll add that critiques and complaints cannot be prosecuted against either unless specifically meant as a smear campaign. Tucker Max is well within his right to critique any one. The best part of his site is that he is so off the wall that this may be an even bigger win for bloggers than my case or the recent Apple vs Bloggers decision.

Technically this is the fourth major decison for blogger rights in just the last 60 days:

The Federal Election Commission (FEC) determined in late March of this year:

Bloggers would be entitled to the same exemption from the campaign finance law that newspapers and other traditional forms of media receive. A blogger can report news and state political opinion as well as any news reporter.

"There will be no second class citizens among members of the media," The FEC Chairman said

The Tucker Max Case(above) determined that bloggers and open forums on the internet, no matter how offensive, are protected "free speech" and that ANY decison against such a site would have reprecussions against the whole of media.