As reported by MacRumors

According to Rob Glaser, CEO of Real Networks, "about half the music on iPods is music obtained illegitimately." Glaser's comments were made in an interview with The Guardian where he goes on to discuss why he feels his company is trailing Apple and what Real's strategy is to improve its standing in the digital downloading market.

Quote by Glaser:
"The average number of songs sold for the iPod is 25, and there are many more songs on iPods than 25. About half the music on iPods is music obtained illegitimately either from an illegal peer-to-peer networks or from ripping friends' CDs, which is illegal."

This is not the first case Glaser has been at odds with Apple or its products. Real drew Apple's fire when they created a technology called "Harmony" in 2004 that allowed Real to sell iPod compatible songs through their music store. Apple later disabled the compatability, and slammed Real for "adopting the tactics and ethics of a hacker."

Apple should seriously consider Glaser to be sued for slander and libel ... he knows that the majority of songs sold from Real's store also go onto Mp3 players that may (or may not) contain files that were not purchased by retail means.

He really should be sued because he is maliciously singling out Apple. 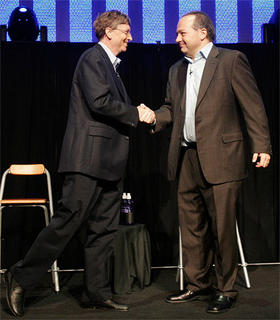 Thing is ... Real Networks ONLY stays afloat because it was subsidized recently by Microsoft. Microsoft GLADLY paid this settlement because of the "knowledge of Glaser's mouth" and the fact they wanted to keep Real afloat as at least SOME competition to Apple's iTunes Music Store.

The only thing that Real is involved in that doesn't suck is their Rhapsody player. It works well enough that I actually use it (to listen to pretty much whatever music I want to) all workday. Most of it being underground stuff that I can't even find on iTunes yet. Their website-based version works pretty well on my Mac too.

Nonetheless...
Real's CEO, their other media player, and a lot of their recent tactics can go get bent. If Rhapsody wasn't set up so well, I'd have no problem boycotting their entire company.

I guess the thing is...
Streaming radio and 128kpbs (yuck!) DRM downloads don't do it for all of us. Please Apple, give me CD-quality (or better), so I can ditch Real.

I meant kbps...I'm tired this morning.

I sent Glaser & Co an e-mail about my thoughts on his comments.

Thanks ... I did the same thing. This website has a lot more to it than you'd think. Behind all the articles here I try to take action and if anything comes of the action ... I report it here ;-)

I have never liked Real's products - Real Player has always managed to mess up whatever computer I have installed it on - I stay well away from it now. If I miss something because it has to use Real Player so be it....

The real gem in this article is that Real is M$'s proxy agent.