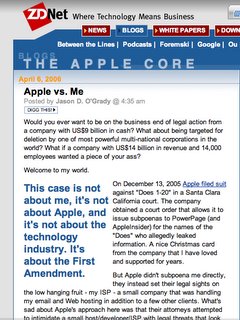 A few reader emails have asked why I haven't reported on Jason O'Grady's article over at ZDNet titled Apple VS Me ...

I'm aware of it and plan to post a few tidbits soon.

First I'll comment that - while I appreciate and welcome spelling error and grammar error critique ... Jason O' Grady's piece was FILLED with blatantly obvious errors ... many of them. So, while I believe he is a news reporting / news agregating site ... and he certainly has a staff of people that proofread his articles ... it's obvious that a staff, a paid unbiased editor ... does not a journalist make. Journalism is purely an intention to report news ... that, he does, and that, he is protected to do by the constitution.

At issue was a series of stories that I ran in October 2004 about an upcoming product that was in development. Was it the next great PowerBook? Maybe the a red hot iPod? Maybe a killer new version of the OS? Nah. The stories about a FireWire breakout box for GarageBand, code-named "Asteroid." Yawn.

The story is = The story's != The stories

The story has AT LEAST 20 such errors. There must be a staff of hundreds for ZDNet and it's sister CNet.

Meanwhile ... read these two comments I posted at Slashdot:

Read the Uniform Trade Secret Act ... it states that if you know information is a trade secret (it even gives the example of "an upcoming product") then you may not report it unless A) It is common knowledge, B) The company has already shown the prototype publicly or C) The company has authorized you specifically to report the information.

This isn't a matter of speech at all ... he's right ... he had the right to publish it ... he didn't have the right to publish it without impunity. There's a difference. This is NOT reporting on scandal, corporate wrongdoing (tobacco, enron, or even faulty product) ... this is expoliting STOLEN information solely for gain ... ie increasing hit totals to show potential advertisers.

It is also a matter of the way in which these things are worded, edited, and poorly reported ... Jason O'Grady's comments on his site often contain mixtures of sophmoric fiction and malice towards Apple.

What Think Secret and the Powerpage have done is; stolen business plans (trade secrets)

I'll post more in an in depth story ... for now ... you can read these previous stories:

Save Nick vs Save Apple

The Powerpage Has lost Power

I was first to report on this topic around the Mac web back in 2004 and broke news on several aspects of this case.

At issue was a series of stories that I ran in October 2004 about an upcoming product that was in development.
[...]
The stories about a FireWire breakout box for GarageBand, code-named "Asteroid." Yawn.
[...]
The story is = The story's != The stories

I can't see any error here - it's "a series of stories" in the first sentence, and he seems to be talking about the same stories further down. You could re-phrase the sentence to read: "It were the stories about..."

Look at the pic to find the article ... there's a possibility it was fixed ... jason O Grady reads my critiques of him regularly.

I guess I'm just too dumb for this one: I still don't get it. The passage I'm talking about is exactly the same in both the quote in your article and the original on ZDNet. (I couldn't find it in the pic you mentioned.) As far as I can tell, neither passage contains an error.

I didn't read the rest of the article, so for all I know it may be riddled with errors and typos, but IMHO the one your're singling out here isn't an error at all - although it might serve as an example for questionable writing style.

But hey, it's your blog, so you call the shots. If you want to bash some writer or website, go ahead, even though in this case I can't see the point.

Sorry I can't make sense of it ... but story's is the proper possessive term not stories. If it is correct in context then the sentence is a fragment.

I just wanted to point out that ... that yes i am being picky ... but an editing staff does not a journalist make.

Whereas I rely more on you (the reader) to correct my spelling errors ... ZDNET has staffs and readers 100x (or more) than this site. They do no better ... editing for content and grammar or editing for poor authors ... ie OGrady

I see what you mean, but I just don't think "stories" is meant to be possersve here - it says "a series of stories" earlier on, so we know it's about more than one story. The sentence that starts with "The stories about..." could be botched possesive, but it could just as well be shorthand for "It were the stories about...", i.e. the "stories" could refer to the series of stories mentioned earlier on. That's why I think it may just an example of bad style, not bad grammar.

Well, I think we've said enough about this - I'm not interested in convincing you, just wanted to make sure I got my point across.