No MySpace In Steve's Places 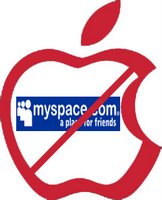 The flagship stores and others have had a chronic problem with visitors hogging the display computers and using them for hours on personal business, rather than demo’ing the computer or software. As I’ve chronicled here before, people send and receive e-mail, have their appointment and check books open on the counters, and are logged into every conceivable Web site. Now Apple has taken notice of the activity, but not from a crowd point of view. Rather, the stores’ Internet connections are apparently taking a hit from all the bandwidth activity. According to visitors, Apple is now blocking the MySpace.com Web site to cut down on net activity. Visitors at certain stores who surf the MySpace.com URL are re-directed to Apple’s own Web site.

Apparently, this wasn't done for security or concern over MySpace content.


Interesting ... what exactly are people doing on MySpace in Apple Stores? I got bored in about 10 minutes. It took me about an hour and a half to "figure things out" and post my page.