A better way of saying ... One Man's Trash Is Another Man's Treasure. 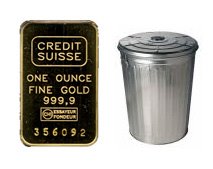 "One man's trash is another man's treasure"

A few days back a friend of mine got upset with me because I wanted to grab something that was sitting on the side of the road near a trashcan. It looked like a lot of electronics, even some DVD movies. They claimed that it would be embarassing for them to be seen "dumpster diving" (eventhough it really wasn't). This same friend also knows that recently I found several thousand pieces of promotional items from Ambien. I was able to sell those items for over $1800 in about 2 weeks time and about an hour's worth of labor.

So this was the scenario I posed to her:

"If she saw 24k gold ounce bars sitting next to a trashcan, and the gold bars had a note on them, "Please take me!" ... would you take them?"

She replied, with a quick, "Yes, of course, but that's not gold bars!"

Then I said, "Where would you take those gold bars to get money for them?"

"No bank will accept gold bars and just hand over cash to you.", I said. Where else?"

"This is stupid", she said.

I said, "This is my point ... I can take that stuff ... what looks to me in good shape, and probably sell it right now for $600 at a pawn shop or sell some of it on eBay within a week ... whereas I would have to locate a gold and coin collector and then have the transaction reported to the government and claim the money on my taxes with the gold bars."

She didn't even know about the coin collector route for the gold bars. The point is ... those items were just as liquid as gold to me and no embarrassment for me.

Sounds like your friends just needs to get over herself. I have goten some of my best pieces of furniture from the curbside.