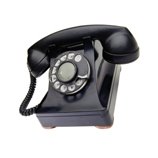 My best friend got a weird call from a California today ...

He immediately called me and asked me what I thought about the call.

He typed the conversation out for me verbatim:

My best friend answers the ring:" Hello, this is (name)"

My best friend says: "I did used to own a Mac mini but I don't anymore. It was several months ago. "

My best friend says: " Why do you ask? Did you need something?"

My best friend adds this:

"This phone call, from someone that I didn't know from a number that I did not recognize, unnerved me to a degree. What did they want if I DID own it still? I had set it up for a customer of mine and didn't know what name they wanted in it, hence the "Mac User" name instead of my name. I entered my phone number in probably out of habit and assumed that the new user would change it."

After the phone call terminated, I was troubled by all the questions I had, particularly why this person did not identify themselves. I remember that the friend I had given it to [your friendly fixyourthinking Editor] ... to sell had sold it to someone and never gotten fully paid for it, so I thought that might be an issue.

When I called the phone number back I could not get a person, only a recording that ultimately referenced the Apple Store."

Here is the exact wording from the voicemail message that you get:

"Thank you for calling Apple Computer, from time to time we contact customers to introduce them to new products or services. Our call to you is to let you know about Mac OS Ten Tiger, the iMac G5, and AppleCare Protection Plan. To learn more about these and other exciting Apple products, please hang up and call 1-800-MY-APPLE or visit www.apple.com."

Apple hasn't promoted the iMac G5 since mid-January ... it is now almost mid-March. It seems suspicious that they would not have changed the message to say ... the new iMac Core Duo.

I googled the number and surprisingly came up with a couple of forums and blogs that are discussing the phone call and the weird circumstances regarding the caller and the number.

I couldn't believe what I was reading ... it sounds like to me [conspiracy theory] that the AppleCare/Registration database had been compromised.

Various people apparently have been getting these calls since April of 2004. Yes ... 2004!

I'm writing this article today to hopefully get some real answers to this weird situation and get an answer from Apple for the reason behind the calls and the unprofessional callers making them OR maybe to put a stop to some fraudulent activity.

Apple, must by law [in many states including my own] be upfront with who they are by name and by company if they are a telemarketer, business, or charity.

If you go to switchboard.com and do a phone number reverse lookup you get nothing for:

But for an actual Apple number that I was referenced in a case number for Apple Customer relations:

I get the following information from switchboard.com:

ALL Apple numbers that I know of come up as being owned by Apple Computer Inc.

The other interesting find is that the number appears to be from Elk Grove, Califormia [in the 916 telephone area code] ... an Apple warehousing location.

So, I put a call into Apple Customer relations at 1-800-SOS-APPL. I was connected with a customer service associate named Les. He agreed that the story of this number sounded at the least, inappropriate ... he promised to call me back after a few minutes of investigation ... he called me back and escalated the case to a higher tier.

I will update this when I receive my next word back from Apple Customer Relations.

My best guess [non conspiracy theory] is that Apple may be outsourcing AppleCare renewals out to a third party. This third party isn't corporate ... so therefore may be unprofessional and unscripted in their tactics and telemarketing skills. If this is the case I am very disappointed in Apple for doing this ... giving out customer information to "shady unprofessional" businesses.

I'm kinda with my friend on this one ... I want Apple to give him more than just a "we took care of it" call ... he really is owed an explanation and an apology. If the Apple registration database has been hacked into ... this issue might deserve more press.

Have any of you had one of these strange calls?

I just got a call last night as well, the odd thing was his communication skills were low and not scripted very well. He said that he wanted to let me know that my warranty on my mac mini was going to expire and wondered if wanted to go ahead and "take care" of buying a Apple extended warranty. I refused and then I asked him if he wanted anything else; I then ended the conversation. It was odd in the sense of the lack of professionalism that I usually get from talking to Apple reps and it seems like a third party. Ironically enough, my warranty on my mini was already expired over a month ago! LOL!

This is the typical communication from this phone number ... I'm waiting on Apple's official response.

From another blog on the topic:

I've been getting calls on my cell for weeks from 916-399-7992. I Googled it and found out it was Apple. For some reason, I believed maybe I won something - like iTunes dollars. Nice. Why else would they be calling me twice a day for the past two weeks? Not the case. Instead, I was greeted by some dude who proceeded to try to hyper-aggressively strong-arm me into signing up for a two-year extension on their protection/warranty program. I politely informed him I wasn't interested in coughing up the $250. He then told me I was crazy and tried to scare me Department of Homeland Security-stizz into taking the deal. So I went TI on him.

Phone numbers can be spoofed easily. Check this service out. http://www.spoofcard.com/

I realize phone numbers can be spoofed ... but the number has been in existence for over 2 years and apparently IS a number Apple is aware of.

You can only spoof the caller ID you can't spoof a number to have calls received ... in other words I couldn't route 1-800-SOS-APPL to my home phone.

here is another caller id spoofing service: the zero group

Just called me, said "This is AJ from Apple". Asked me "How are things going?" Then asked me something about some sort of X Serve. When asked what he was talking about said something about believing me to be with a Jacob School of Engineering and an invoice they'd gotten.

Immediate impression is that this is a some kind of information gathering hunting expedition.

My experience is a bit different. I contacted Apple about a business lease on a MacBook Pro. I contacted Apple Financial, and they sent me an application for lease. Once I sent that in, Justin Pearson called from Apple. We chatted for a few, and he told me he would be processing my lease app that was forwarded to him, and that he would be the contact. He was a young guy, like myself (27), so he was casual in his phone conversation. (But that's how I am too, so it didn't strike me as unusual.)
Anyway, later someone from Apple Finance emailed me with a decline because of lack of established business credit, and I noticed that they copied Justin on the email, (Justin has an apple.com email address).
Since then, Apple sent my leasing info to a third party lease company (intelilease), to try and get me a lease through them. I decided to go the purchase route instead, though, and let intelilease know. Robin, at intelilease kept Justin in the loop, and he called me back to let me know that if I decide to purchase, he could still help me, and to call him. He gave me the 800 number that I could reach him at, and left his extension. The number he dialed in from was the same number you mentioned above, (916) 399-7992.
I personally don't feel worried about it, because of that fact he was included into the loop by Apple Finance from the get-go. That could just be my experience, though, and I thought I would share with you.
Thanks!

Thank you for your input. My best guess was that it was an outsourced financial arm - taking care of leasing and applecare.