Bug Spray For The Beatles? Beatles vs Apple in court this week.

The Beatles' Apple Corp and Apple Computer are due in court this Wednesday over the use of the "Apple" name, reports Macworld UK. "The case was filed July 4, 2003 in the UK High Court. Apple is accused of breaching a 1991 agreement over the use of the Apple trademark and the computer companies move into music services," notes the story. "After years of legal cut and thrust the case goes to trial this week. Apple Corps wants Apple Computer to stop using the Apple brand in association with its music products and to pay damages."

I really don't see how the Beatles have a case here. No one associates Apple Corps records with Apple Computer. I would venture to say that it helps to strengthen the name if anything.

I also have seen that Paul McCartney has been all buddy buddy with Steve Jobs and iTunes ... why can't Apple ever leverage their support for these people as a means to a settlement? 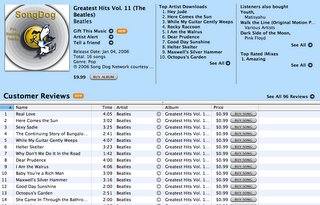 After all the Beatles ARE on the iTunes Music store ... so ... are the Beatles self fulfilling their own case against Apple?

I think The Unofficial Apple Weblog had a humorous-yet-accurate way of spelling it out to Apple Records.

This is clearly a case of suing someone because you can and not because you need to or should. Lawsuits like this should be brought to a jarring halt and the pursuers of same should be fined for jamming up the court system.

Apple Corps is clearly trying to capitalize on this for financial reasons only. They know that Apple will probably settle for a larger sum of money than they could make in five years.

So many musicians use the Mac now, this is only going to hurt the music industry, not help it. Drop the lawsuit, Apple Corpse, and get a life. An iLife.