Two Suits: Not Of The Poker Kind; But Watch Out For These Jokers 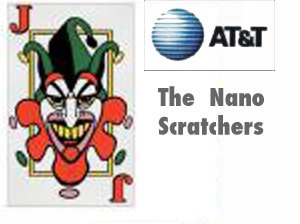 Apple has had two suits filed against them in the past week:

The first involves the iPod Nano and a consumer's group in California:

According to a report on Macworld UK's Web site, a consumer group has filed a lawsuit against Apple alleging faults with the digital music player's quality. "Apple Computer's iPod nano music player, marketed for its sleek beauty, cannot withstand normal use without becoming severely scratched, often to the point where its screen is unreadable," the complaint alleges. "Apple is refusing to give refunds to purchasers who bought the defective product, while forcing others to pay a $25 fee to get a replacement that is supposed to be 'free' under Apple's warranty," the complaint continues.

Moving on, Apple also saw a potential threat from AT&T:

Back in October of 2005 MacMinute reported:

AT&T is evaluating different operating systems, including Mac OS X and Linux, as alternatives to Microsoft Windows for internal use. "The company's chief information officer, Hossein Eslambolchi, has set up a team in AT&T's research labs to assess the appropriateness of desktop operating systems for the company," reports CNET News.com. "The company currently uses Windows on its desktop PCs, which number in the tens of thousands. The engineers are testing and measuring how Windows, Linux and Mac OS X stack up on security, reliability and total cost of ownership, Dickman said. AT&T expects to make a decision on the merits of the desktop operating systems by the end of next year or early 2006."

Were they really just evaluating Quicktime for patent infringement?

I'm not sure if AT&T couldn't be countersued for defamation ... I'm not sure if they have the right to warn retailers without a court hearing or judgement about patent infringements.