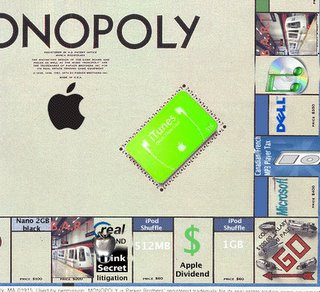 
A lawsuit filed in September of 2005 can proceed says a California judge.

Plaintiff Thomas Slattery's lawsuit claims Apple configured the iPod so that it will play only iTunes files and not digital music files from competing vendors of online music. Apple has also encoded its iTunes files so they will only play on the iPod and not any other digital music player, the complaint says.

The suit says another company, RealNetwork, reverse engineered Apple's iTunes format and began selling iPod-compatible music files for 45 cents each, compared with the iTunes price of 99 cents each. Apple quickly changed its software code so that the RealNetwork files would no longer play on the iPod, Slattery says.

I can't see why this judge allowed this to proceed.

1) Some competing music stores sell songs with no DRM ... they will work on the iPod. And in actuality, any song from any store can be transcoded or ripped back from a CD and used on the iPod. Also, isn't Audible.com compatible with the iPod?

2) "Apple has also encoded its iTunes files so they will only play on the iPod" ... the songs seem to play fine on all the Windows PCs and Macs I have seen <--- those aren't iPods.

3) Apple has created the only successful business model for MP3 players and downloadable music ... what the RIAA and this litigator don't understand is that it takes a large market share for this segment of technology to be successful.

4) What is Thomas Slattery hoping to get out of this?

Conspiracy theory: this is one of the dangers I saw coming from Real Networks huge windfall from Microsoft. Is it remotely possible that Real's Rob Glaser has motivated (or handed money under the table) to Mr. Slattery? Something to think about.

Agree with you. Just wanted to add that iTunes DRMed songs also play on Motorola phones.

People need to think of it like video games. Let's say you have three competing consoles -- for the sake of argument, let's take a look at Super Nintendo versus Sega Genesis versus Playstation. Super Mario World only plays on Super Nintendo, and the author of Super Mario World just happens to be Nintendo. So if you want to play Super Mario World, you need a SNES. By the same token, if you wanted to play Sonic the Hedgehog, a SEGA property, you'd have to buy a Sega Genesis. Fact is that these are competing platforms with the same purpose -- video games -- but diverse game selections. The same is true for music -- the iPod only plays iTunes DRM and not WMA, and other players play WMA and not iTunes ... just because iTunes/iPod is a closed system doesn't mean there isn't competition in the marketplace, but rather that people prefer iTunes/iPod to the alternative products. Some people will prefer Genesis, some prefer SNES. And when the N64 and Dreamcast came out, people had to buy new video games all over again for lack of backwards compatibility -- so if you switch from iPod to something else, you shouldn't have a right to bitch about your music not working anymore. Fact is, you can burn it to CD and rip the DRM off anyway (or use a program like JHymn), so it's not that big of a deal.

Is that a real version of Monopoly? I don't care if it is yet or not, I want!!

Very good comments ... and thanks for the addition of the Moto phones.

The Monopoly game was a 5 minute photoshop ... but even i have to admit ... I like it too. I think i'd run into some licensing issues if i tried to market it though ;-)