One of the other things I noticed at Macworld Expo was the lack of differentiation between sellers. They are pretty much all selling the same things now, just with slightly modified inner shell.

For instance, DLO, Griffin, and XtremeMac all announced home docks with remote controls at MacWorld ... each of them doing basically the same thing.

Belkin and Griffin definitely have an advantage with this distribution model because they have a wider distribution than DLO or XtremeMac.

These various product developers are taking trips to Asia ... finding these products and then designing an outer shell for them ... maybe tweaking the insides a tad.

It's disappointing because I have seen prototypes and know of many ideas and directions the iPod has yet to go ... even greater than audio and video. It's disappointing to see these great companies just result to copycatting one another.

One glowing example of copycatting gone wild in the iPod arena is the Automobile FM transmitter area: 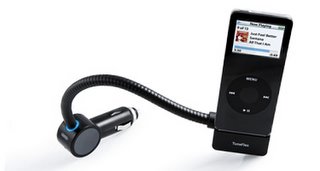 And lest anyone forget ... Jack Campbell tried to release The PodBuddy that looked like this: 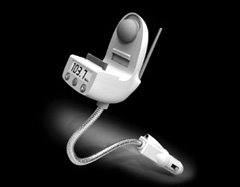 He was bashed (even on this site) for trying to release The PodBuddy. DLO, even went as far to make DVForge (now out of business) cease any release of the PodBuddy due to patent infringement. Now, Griffin and Belkin have been added to that list.

While it would be nice if everyone would innovate, typical manufacturing of ANYTHING in all product categories is rife with variations on a theme.

A recent trip to the supermarket reveals that when one company comes out with an orange-based cleaner and it has any degree of success, all companies come out with orange-based cleaners. I went to the store looking for a Swiffer duster (a cool cleaning product) and there were no less than three variations on this from Endust, Pledge, and another company.

Companies make more money by performing these variations on a theme because what they are all copying or variating is obviously popular with consumers. Why try to gamble on what people MIGHT want when you can strike gold with what you know they do want?

Playing a little Devil's Advocate here (starring Al Pacino) but I don't think we can seriously blame these companies for trying to make money in the consumer space. There's no illegalities involved and occasionally someone DOES come up with something original and we all benefit. Additionally, if companies can make something less expensive, it keeps the originating companies from charging too much for something we all want.

In a world where everything we know is copied, we need a robot renegade writer to point these things out, but whether its one man, a girl, two girls or whatever that's buying these products we need to note that now more than ever we get better prices on everything. I'm getting out of the booth.