On the heels of the UN announcing 1 BILLION IN SUPPORT $$$ for the 1 laptop/$100 per child program ... I thought I would repost this previous BLOG entry:

As reported by Macrumors:

The Wall Street Journal reports on an initiative to develop a $100 laptop targetted at school children in developing nations. A non-profit organization called One Laptop Per Child has been formed to oversee the project with plans to put the laptop into the hands of 100-150 million children.

The $100 design remains a challenge and has not yet been solidified, but due to the scope of the project has drawn interest from many industry leaders, including Microsoft and Apple.

According to the WSJ, Steve Jobs offered to provide Mac OS X for free for the upcoming machine. The offer was declined [ due to demand by organizers ] for a 100% opensource solution. This offer was only possible as Mac OS X is now capable of running on the x86 architecture; as well as the PowerPC. The new $100 laptop will be powered by an AMD processor running Red Hat Linux.

[UPDATE] I've gotten one comment here, an email from a friend, and two other reader emails concerning the title of the article and the feature picture. This is meant to be satirical. My point is strong ... I was criticized on the Macrumors board (where I discussed this early this morning) for not being understanding of children's true needs. I care, I do my part (and then some) ... so I am by no means hypocritical. I constructed the title to separate this article from others discussing this topic. I did the picture to be an eye opener and in some ways a truth. - Philip / Jackwhispers Editor

Am I the only one that is seeing some conflict of interest here? I find it interesting that AMD has been chosen as the supplier of chips ... it is the "chip producer of choice" amongst the Linux community because it's not mega corporation like Intel. AMD embraces Linux moreso than Intel.

This could mean HUGE research money to other parties involved in this; MIT, Red Hat ... trust me ... these entities have dollar $IGN$ in their eyes, not tears for needy children. 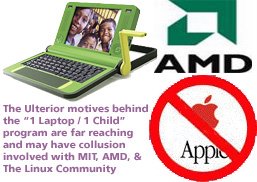 I guess this laptop will be able to have Mac On Linux though ... so anyone thinking the Mac OS is still out of the equation ... there is a possibility.

My gripes with this plan:

1) Isn't food, shelter, water, clothing, and economic investment better to pursue? Only if factories for these laptops could be placed nearby that would be support hubs, jobs, and wealth creation would this be a true success.

2) I have a problem with this program going forward without a true plan for the content for education that is placed on the laptop ... what are we going to give them on the hard drives?

3) What will stop someone from selling their laptop on eBay ... you can be assured this will happen or a black market will arise.

4) Will children who are JUST AS NEEDY of this technology receive them in the USA, Japan, and England? A starving body and a starving mind are equal as born into this world.

5) Is there ulterior motive in using Linux that isn't being discussed here? Microsoft has shown interest, but won't fund a Linux project. Microsoft (and the Bill & Melinda Gates foundation) have deep pockets. This really wreaks of the communistic/socialist attitude that a lot of Linux types have ... you only need to visit Slashdot to see how apes the Linux community is over this news ... they think it will mainstream Linux and provide them a new avenue for revenue ... Linux isn't as free and open source as most "who use it" would have you believe.

It is mythical that Linux is free ... it is only free to the complex mind ... for people that know how to assemble 100's of components from dozens of sources ... support isn't free ... hey ... Red Hat has to make SOME money or they wouldn't be in business.

The ONLY way there can be success in this is if there was benefit to a larger corporation that would donate in lieu of research gained ... this is why I find the movie Contact so interesting ... how the world gets together to to build the machine ... "that may change mankind" .... but when it comes down to paying ... countries and corporations have to be pawned politically to make it work. I find that insightful into this situation.

Anyone saying iTunes is needed is just wasting breath because while it is "the reason the iPod is so successful" and is the easiest to use - it also connects to the iTunes Music store as a compelling part of its component ... can someone who qualifies for a $100 laptop afford a CD or an iTunes download?

That opens a whole new can of worms in my opinion ... if you think piracy is bad now, put the ability to download, listen to, and play music into the hands of 150 million children who will discover pop culture with these laptops!

... I say we just go ahead with The Modest Proposal

For Preventing The Children of Poor People in Ireland From Being Aburden to Their Parents or Country, and For Making Them Beneficial to The Public

Speaking of which, are those laptops Soylent Green colored?

Email ThisBlogThis!Share to TwitterShare to FacebookShare to Pinterest
: OLPC, Scams

If this kind of $100 laptop is even possible, we should deploy it here in the U.S. first. Why are we neglecting our own people in an effort to improve the lot of people abroad? I'm all for helping out other countries, but let the foreign countries buy the technology at a low price from us if they can afford to do so. First, however, let's see if this initiative is even possible on a smaller scale before the UN or any other organization that we end up being the primary source of funding for starts throwing money at it.

I agree that this is a scam designed to further the interests of the Linux community, AMD, and other companies that wil latch onto this money and use it ultimatel for their own purposes. I cannot believe that ANY organization will lightly throw out a figure of one BILLION dollars as a first shot. That is simply ludicrous.

It makes no sense that OS X would be turned down for a unit like this. None. There is plenty of freeware available for OS X and certainly better support. Heck, they won't have to do MUCH support at all. This is clearly a case of someone having a hidden agenda. Its like public transportation turning down an established fleet dealer in favor of an experimental car.