This is one of the last three stories I have to move over from the old site ... it's pertinent to today's discussions for several reasons, the main being, what if ...

Did the creator of the Cherry OS, Arben Kryeziu, actually have wind of the project inside Apple this whole time? I know it's floating a conspiracy theory and I know that he was caught for stealing code from PearPC (read the story below for details) ... but ... in case you hadn't noticed, Rosetta almost exactly matches the claims made by Kryeziu. (About 50-75% PowerPC performance on an Intel processor ... 2Ghz Intel = 1 Ghz PowerPC performance.

It's something to think about as we revisit this story considering Macs with Intel processors.

Just remember that Jobs revealed at WWDC in 2005 that Apple has had concurrent versions of PowerPC/Intel for Mac OS X since 10.0.

We knew this day would come. At least we thought someone would attempt to make this day come. October 12, 2004, a company appeared to have brought the Mac OS to the Windows world - essentially turning a PC into a Mac. The key word is "appeared"

I wanted to follow this press release for at least 24 hours before I posted a story here on JackWhispers. I wanted to ask a few questions of the company and research the different forums that came up yesterday. Most of the regular Mac news sites just posted the story to get hits without really delving into the details. Your insightful Jackwhispers editor has dug up some very juicy details about the "Cherry OS".

• CherryOS is a G4 Emulator giving you the option to use OSX on your PC.

That's where the simple and believable description stops. The software promises full PCI, USB, firewire, sound, hard drive, and peripheral support as well. If that were true, this would have been a much greater breakthrough and Apple would have IMMEDIATELY shut the software site down.

But, that's not where the fantasy ends:

• The software claims to run an equivalent speed of 80%

If you were to translate this properly - Apple's CPUs are about 1.2X as fast as the equivalent Pentium 4 and Pentium 3 (compare to Apple's G3 & G4 respectively) - so essentially the claim is saying it will run a 100% equivalent Mhz / speed ratio. This means if I had a 3Ghz Pentium 4 with 1 Gig RAM - I would have the equivalent of a 2.4Ghz G4!!

The claims also go on to say that there is FULL iApp support. Meaning, you could use the entire iLife suite of applications. That equals; iDVD, iMovie, Garageband, iPhoto, iTunes. These programs take up enormous amounts of computing resources and depend tremendously on hardware. This claim is certainly misleading. 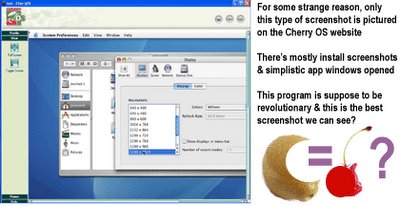 My supposition is that this is an outright scam - essentially a facelift and theft of the PearPC program; which is the previous OS X emulator. [By the way, it's also open source and free] PearPC is believable because I have actually seen it run. It runs only as an OS shell. In other words, it doesn't really turn your PC into a useable Mac System. It just lets you use programs and run Mac OS X on TOP of Windows. No hardware is actually supported. You can think of PearPC as "playing the Mac OS X game" on your screen. On a 3.2Ghz Pentium 4, I have seen PearPC runnning Mac OS X Jaguar. It runs at about the speed that a 233Mhz iMac runs OSX. (That's pretty abyssmal, in case you didn't know)

Concerning CherryOS.com: The webmaster appears to be a very talented graphic design artist. The website is really well done. Just remember what FYT told you about pretty websites? SpyMac has one of the most elaborate websites within the Mac community. The owner also pulled a teriffic hoax by making a video showing an Apple PDA called the iWalk.

None of my emails to Arben Kryeziu were returned or answered. Arben is the owner and seems to be one of four total people at the company; MXS. The claims, for credibility of the Cherry OS, are that the streaming video product VX30 that is produced by the company is very up and coming. I couldn't find anyone that is using this technology; a java video player, or how it differs from the other java video applications that already exist. Was this another piece of coding that Arben Kryeziu may have lifted and reinterfaced, and then given a pretty website to wrap around it and sell it?

My advice is to see how all of this pans out before sending your $50 to "test drive" the software.

Where this presents a real problem to Apple is; if true, this could mean a significant number of people may start purchasing the Mac OS to install on PCs using programs such as CherryOS or PearPC. This could cause an enormous amount of confusion and a significant cost in phone support and Apple Store support; not to mention the small Apple consultants around the world. This is one reason I hope Apple will put a stop to this. As an Apple consultant, I don't want to share this new support burden.

Now, in a little bit off topic commentary, I thought I would share some knowledge about Windows emulators and the companies that produce them. I had conducted an interview with FWB a while back and didn't get any real substance from the interview to publish, but there were some interesting details. The reason this relates is; I'm seeing a pattern that emulation may be the next "get rich quick scheme" to hit the tech world. Since computers have become so fast, emulation of older systems and cross platform systems has become one of the hottest development areas in software. Read this Mac history that I have gathered and see what you think.

Both Connectix and Insignia (the two main companies that produced Windows emulation for the Mac) were actually just venture capital firms. This is why Connectix, at the height of every product launched, would just sell it off as an asset.

Insignia was the same:

In an email interview with Mark Hurlow, President of FWB he stated that they simply licensed the code rather than bought it from Insignia for SoftWindows. The reason they never released an update after leasing the code was because they didn't see any merit at the time in releasing a new OS X version and didn't have the development time to dedicate to it before the lease ran out.

Insignia is supposedly shopping their emulation solution around to others that may want to develop it.

I have found that these two companies were essentially started up by venture capital and paid off their investors, dumped their employees, and the owners got filthy rich.

Here are some insightful comments posted to the FYT comments:

"1. The CherryOS website is actually a template. I've spent quite some time looking for it, but decided to call it a day...

It's either Design Galaxy, Boxed Art or Template Monster.

Either the company didn't have the time to design one themselves or couldn't be bothered.

2. The domain name was only registered recently.

3. I find it hard to believe the whole thing (CherryOS) was created in less than 4 months. It must've taken only 2-3 months to come up with a working version.

A reader from engadget.com observed a VERY recent change to the CherryOS website:

"CherryOS has been tuned for performance. You can expect to get about 80% of your processors power when working in the Apple Environment. For example a 3.2ghz P4 would run as fast as a 800 MHz G4 machine."

Taken from a MacMinute forum response and the FYT BLOG:

"Apple makes their money on hardware, not software. A Cherry OS sale could be a lost Mac sale. A MacOS X sale doesn't make up for it."

Actually, Apple made 213 million in software sales last quarter alone. They average about 1 billion a fiscal year in software sales. I'm not sure if this includes the Filemaker division or not. But the point is well made. Apple could potentially lose hardware sales over such a product. But at the moment - it's not even a remote threat as the Cherry OS has ficticious claims on performance and almost certain hardware problems. It's almost a given that this is stolen PearPC code.

Please read these followup FYT stories related to this topic:

Arben Says, "I can not tell a lie, I chopped down that cherry tree"

Drunk, but alert enough to write a masterpiece

Losing A Classic: The Why & How Of Keeping OS 9