Should It Be Spelled ReBAIT or Rebate? 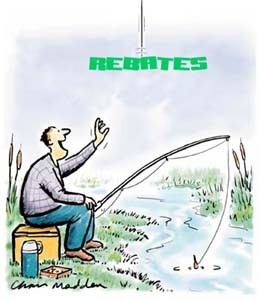 While many websites seem to complain about rebates, few, if any (read as; none that I found) give any tips on how to better manage rebates so you can get your rebate quicker and more often. Read this story and find out a method that gets me my rebate 99% of the time. I say 99%, because nothing is foolproof ... I just have FAR less problems if I use this method than my counterparts who don't do this and submit the same rebates.

When You're Good To Mama ~ from the movie Chicago

One of the price gimmicks that I hate to love is; rebates. If you take the time to shop for rebate deals - you can save a lot of money. But there's the hassle and then there's the float time. The float time is the time it takes for you to spend the money vs. when you get your money back. In the case of recent hard drive deals in particular; this could be a substantial amount of money.

Of course rebate companies, retailers, and manufacturers count on up to 25% of purchasers to:

A) Not even bother to send in their rebate
B) Not fill in the rebate properly (incorrect address - rebates ARE NOT forwarded)
C) Not to submit requirements (making sure to include receipt, UPC bar codes, other requirements)


I have always thought that, rebate companies occasionally participate in "nolo ablego" or in pig latin, 'No senderay'. I think the occasional rebate just isn't sent out, hoping the submission will have been forgotten. After all, rebate processing houses are paid based on the number of submissions, not in bulk. This means that any check that isn't cashed is money back in their bank.

When I submit a rebate I do the following:

1) Have a calendar for just rebates - I mark the week I expect to receive the rebate & write down the customer service phone number along side it. 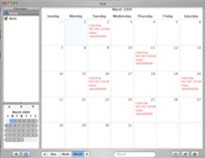 2) I submit a typed form along with the rebate that reads something like this:

I am expecting to receive this rebate no later than: May 1, 2004

My address (with phone number) is:

I have included (see stapled): The UPC from the box, the original receipt,

and the rebate form, plus this convieniant information form for you.
Thank you,
John D.


Sending the little form above serves two purposes. One is to make sure they know my information and know that I know I have submitted the required information and reviewed it carefully. The second reason is to let the rebate submission processor know that I will be trouble if I don't get my rebate as promptly as possible.


There's a catch of course to getting your money back from rebates; especially when it concerns "free after rebate items".

You've got:
a) the pen & ink costs
b) the postage costs
c) the envelope costs
d) your time
AND ONE OF THE MOST OVER LOOKED
e) taxes on the original item cost

By the time you add this up, it's hardly worth sending in a rebate for something costing less than $10 that was promoted as "FREE". Such as this item: 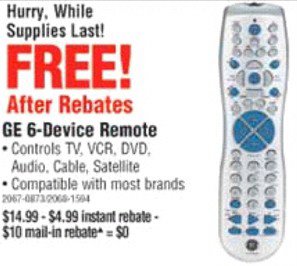 Although this item is $10 before rebate and $0 afterward, this SAME EXACT item is only $6.96 at Walmart. Depending on managers - most office stores won't price match for items that have rebates. That said, if you know how to work the system you can actually take advantage of this kind offer. If you buy from stores that do rebates regularly and give them consistent business, most ANY manager will make an exception for you. This particular remote comes from OfficeMax. They price match by 115% of the difference. This means you would actually get this item for $6.50 + tax. In turn, you would get a $10.00 rebate. You've just MADE money for buying something and you've paid for your time and supplies costs as well.

Most items available for rebate are this way. Usually items are higher priced so the store has a good margin to work with and can pay the rebate processing companies they use. For this particular item - I always buy it month after month along with a few other items. I then turn around and sell them to family and friends and even customers for $3. These remotes go for $5 to $9 on eBay as well - the MSRP is as $19.99.

One company that took the rebate process to an extreme during the dot com boom was: cyberrebate.com. The site featured 100's of items that were free after rebate. Shipping was free. You simply ordered items off the site, got them by UPS a few days later, then submitted the rebate. Sounds great right? The catch was, items like a single votive style wax candle, were $40.00. This same candle was a retail candle for $4 at even the highest of retail stores. Another example was a creative nomad jukebox Mp3 player. Cyberrebate price = free after rebate BUT $2695.00 BEFORE rebate. Yes that's TWO THOUSAND! This item retailed at CompUSA for $399.99; a few short months later; only $199. Rebates from CyberRebate would take about 10-12 weeks to reach you. (That's 3 months when you count normally) I admit, I tried it; mainly because you could combine rebates into one submission. One rebate check would come back to you. Rebates were unlimited to the submission address (unlike most rebates which are limited to one submission per household).

Only one store (that I know of) allows multiple rebates in one envelope (such as CyberRebate did) - that's OfficeMax.

When I went to the CyberRebate website to research this story, I see that, the lawsuit that was filed back in 2002, is now ready for reimbursement. I haven't heard much mention about this on Slashdot or in the news. CyberRebate's "rebate baiting" backfired on them and they couldn't afford to pay out the rebates. They got so far in debt ($2.5 million) that they had to shut down. Some people were left without getting their money.

An interesting message now appears on the Cyberrebate homepage that was just updated January 31st of this year.

Another way to make money/save money with rebates is to use a credit card that pays percentages back. In the case of the Western Digital 250 Gig hard drive pictured on the front page - this equals $3.75 with the Paypal cash back program of 1.5%. Best Buy, OfficeMax, Office Depot, and Staples all have loyalty programs that yield 3%-5% off as well.

Occasionally you can apply coupons to online orders and usually shipping (when ordered online) is free. This week if you ordered all of OfficeMax's free after rebate items - used a 1.5% back credit card and used their loyalty program MAXPERKS + used a $30 off $150 coupon - in 8-10 weeks it's like you were being PAID $60 to buy those items.

I have always been surprised that Jack never tried rebates at MacMice. Maybe even he can see that rebates are just a marketing ploy that results in bad vibes with some customers.

Email ThisBlogThis!Share to TwitterShare to FacebookShare to Pinterest
: CyberRebate, rebates