As I was going through the archives of older stories to make sure I didn't need to do any more updates or transfers from the old website ... I found a story I hadn't transferred ... turns out ... the situation is even more true today than when I reported on it a year ago. Read this latest message found at bleurose.com ... then read this story!

To those of you who were loyal customers we wish to express our sincere appreciation for your support over the years.
To the psychotics who sent us hate mail regarding our decision to discontinue supporting the Macintosh platform, your ridiculous and often extremely offensive comments were all the more reason to leave you in our dust. 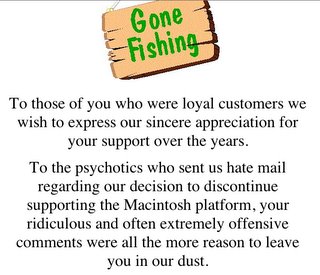 About Bleu Rose Software & Their Decision To Exit The Mac Market 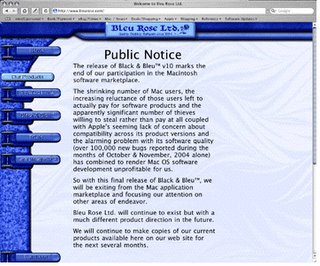 The release of Black & Bleu™ v10 marks the end of our participation in the Macintosh software marketplace.

The shrinking number of Mac users, the increasing reluctance of those users left to actually pay for software products and the apparently significant number of thieves willing to steal rather than pay at all coupled with Apple's seeming lack of concern about compatibility across its product versions and the alarming problem with its software quality (over 100,000 new bugs reported during the months of October & November, 2004 alone) has combined to render Mac OS software development unprofitable for us.


So with this final release of Black & Bleu™, we will be exiting from the Mac application marketplace and focusing our attention on other areas of endeavor.


Bleu Rose Ltd. will continue to exist but with a much different product direction in the future.


We will continue to make copies of our current products available here on our web site for the next several months.

Let's break this down, shall we?

"end of our participation in the Macintosh software marketplace." - do you participate or develop? The question is, do you contribute?

"The shrinking number of Mac users" - what planet is the author of this message from? (click here for contradiction) Mac marketshare is growing significantly. Even if marketshare stays stable (which it has), MORE people are buying ---> 4%-6% of 1000 is not the same as 4%-6% of 10,000.

Why is Graphic Converter one of the highest shareware paid programs? Because it's useful, it's well designed, and updated often. Bleu Rose makes novelty software. The Information that comes from Black and Bleu: Mac Error Codes software isn't useful except to someone playing around. Only a tech would find this information useful and an AUTHORIZED tech SHOULD have this info available.

"...Apple's seeming lack of concern about compatibility across its product versions" - how long were Windows users waiting for service pack 2 again? Thank God Apple updates often! Are there issues, sure. But as computers have become more complex, so has the support of different configurations and components. It's not like Apple's base has a Mac Plus from 1986! ( Although I still have mine *smile* )

Notice no "thank you's" - no wishing us well - no giving the software to the Mac Community as freeware. Nothing. This says to me as a buyer - "Yeah we took your cash, sue us, if you don't like our decision"

Here are a couple of notes about the Bleu Rose website. Umm ... design. Who chose the puke blue with grainy gif images? I see the "site view counter" only said 8300 since the current page was placed on the net in 1996.

I'm not tooting my own horn here, but FYT has gotten 48,786 hits in the month of December alone. The story about MacMice has received over 200,000 hits. The story about Paypal has received over 18,000 hits. FYT will be celebrating it's first year on the 5th of January 2005! This site gets almost zero recognition, other than an occasional posting on Macsurfer and through my own advertising in various Mac forums & Slashdot. The content here isn't interesting to all Mac Users, but at least I'm trying. 8,000 hits in 8 years is very telling!

Bleu Rose blames the lack of purchasing the software on Peer to Peer thieves - hmmm - what was the excuse in 2000 before all of that was popular? Maybe they just don't develop anything that any body wants.

Take in to account that a popular website (XLR8YourMac) has published a small blurb about this. This is actually where I found it. So the website had probably already received several hundred hits just from that.

Versiontracker shows Black & Bleu being downloaded 508 times for all versions. Compare this to a useful utility like; Graphic Converter - which has 596 reviews and has been downloaded 13,900 times for just the OSX version. (Almost 75,000 times for the OS9 classic version)