This comes at an interesting moment in time. Yesterday also brought news that WinAMP had laid off most of it's employees and was no longer creating or supporting it's product. WinAMP was the first truly successful MP3 player (for Windows) - within 8 months of it's "rising popularity trend" - MacAMP was created. MacAMP later became Macast (due to legal issues with Nullsoft - creaters of WinAMP) 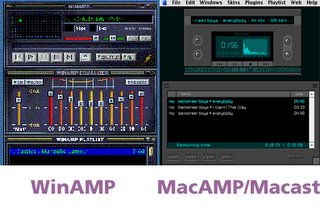 November 12 2004:   Panic has officially ended development of Audion, its once-popular MP3 player/encoder. The company is now offering the audio application free of charge. "This obviously wasn't an easy decision," said Panic co-founder Cabel Sasser. "So, why do it? Put simply, it all boils down to an inability to compete fairly with iTunes, which is free and, you know, pretty good. But the story isn't that simple -- there's much more to Audion's past than one simple sentence. That's why we've put together the 'True Story of Audion.' It's a bit long, but in it you can learn many things you probably never knew, like how Audion almost became iTunes, how Panic almost became an AOL company, how our Apple boardroom meeting with Steve Jobs went, and more."

This story is truly a great read. It is well written.

Here are a few tidbits:

"When we created Audion, our Mac-only, multipurpose MP3 application, Steven Frank and I had one goal: we wanted to listen to our music CDs on our computers while we worked, and we wanted to it be stylish. We had no indication that MP3s would one day turn the music industry upside down and have it running for cover. We certainly had no idea that something like the iPod would pop up and literally change Apple as a company. And even though we weren't really responsible for any revolutions per se — rather, we rode on the revolution-train with many others — everything that happened to Audion just fell into place, magically and unexpectedly, like so many beautiful moments in life."

"We had no indication that MP3s would one day turn the music industry upside down and have it running for cover."

Sure Audion knew it was going to be a revolution. WinAMP was the hottest talk amongst the computer industry and especially with the high school set back in 1997 and 1998. While there were few portable devices to play MP3's - all of my friend's had MacAMP or WinAMP. A friend of mine had even converted some 27,000 songs into MP3's and was even charging to do it for others. Wow, was he ahead of his time or what?

Truthfully, I was always drawn more to SoundJam. The story indicates that Cassady & Greene's SoundJam was obviously the biggest competition on the Mac platform.


Soundjam was the first software I ever purchased at retail.

Trust me, I wasn't keen on any product that Cassady & Greene put out. As an Apple Service & Repair guy, Conflict Catcher was my #1 worst enemy. I loathed to see it installed on the Macs I would service. 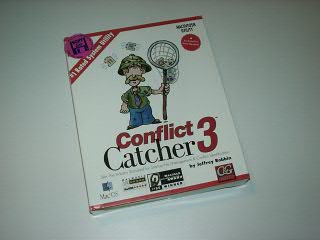 I also got interested in Soundjam due to the development of visual plugins. The unique thing to Soundjam's visual plugins was that they were just editable simpletext files. With just a little calculus and trigonometry, you could make new plugins without a text editor or without complicated backend programming knowledge and development resources.

The company that took the most advantage of this was SoundSpectrum; the company that produces WhiteCap and G-Force. (Originally this was just an enlisted marine that made visuals in his spare time, I think it's actually grown into a corporate atmosphere now) The visuals that were created for Soundjam (by SoundSpectrum) also became the backbone for the built in visuals for iTunes. Later, the plugins were developed for Audion. If I am not mistaken, support for the visual plugins from SoundSpectrum for Audion was dropped about a year ago.

To me, unlike the story from Panic would indicate - I think the visuals are the real reason Soundjam ended up winning and the fact that Audion did not have a built in MP3 encoder. Also, the Soundjam player was free, but if you wanted advanced features - you had to pay $29.95. That $29.95 included a free headphone minijack to RCA cable adapter for converting your analog "tapes, vinyl, 8Tracks" into digital form. Besides this fact, I'm a true believer in naming is everything. I believe your brand name is your most important asset in product marketing. SoundJam just appeals to me more than Audion.

Now, let's go back to the original piece I pulled from the Audion Story:

"We certainly had no idea that something like the iPod would pop up and literally change Apple as a company."

This is certainly a shortsighted statement. It was quite obvious at the time Audion came out that a revolution was starting and that more and more kids were downloading music from "semi secret websites". Another thing, the iPod has not changed Apple in any way. Sure, it has changed their bottom line, but the concept at Apple under Steve Jobs is (in his own words):

"We feel we can innovate out of the present market recession"

My question to Panic is: When you're down or sales aren't as brisk; should you just quit? I say no. I say Panic should continue to develop and push Audion, but possibly in a different direction. Be creative! How about making an MP3 player backend to license or co developing a download service that will allow iTunes to play protected WMP files or working with Napster to allow Mac Users a great player to play Napster downloads. You can almost be assured that Samsung would bundle the software with their custom Napster Yepp MP3 players.

The company (Pixo) that produces the operating system (under contract with Apple) for the iPod is very successful. 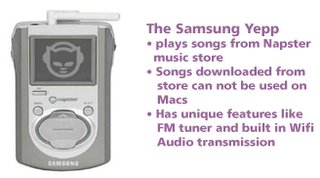 I can't stand it when companies just throw up their hands and concede to defeat. You are only defeated if you lose your endless pursuit of creativity and desire to capitalize on it.

"And even though we weren't really responsible for any revolutions per se — rather, we rode on the revolution-train with many others — everything that happened to Audion just fell into place, magically and unexpectedly, like so many beautiful moments in life."

I find that those that ride "the trains of popularity" often find themselves the caboose. You have to fuel the fire in the engine to be able to stay ahead of the other trains. But watch out for the companies releasing automoblies, planes, and even teleportation!

Jackwhispers Note: I want to make it clear that I appreciate Panic and especially the excellent story they provided about Audion's development and demise. It's one of the best reads I have read.

Success is counted sweetest
By those who ne'er succeed.
To comprehend a nectar
Requires sorest need.

As he defeated -- dying --
On whose forbidden ear
The distant strains of triumph
Burst agonized and clear!

Email ThisBlogThis!Share to TwitterShare to FacebookShare to Pinterest
: Audion, iTunes