New Feature: Jack Does Know Jack: Paypal: Is You Is Or Is You Ain't My Buddy? 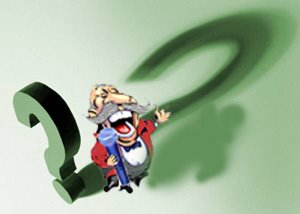 Many of you may be wondering why I don't have a lot of comments to the stories on my BLOG ...

My best assumptions are:

1) I have a rather unpopular opinion here ... I'm not afraid to offend ... even if it means someone or something I have believed in.

2) Most all of the posts here are nonrhetorical; meaning most would agree with what I say here ... once they understand the full story as I have explained it

3) I get A LOT of emails ... as I think, people are afraid to post here in some regard. I'm glad this site doesn't have people who regularly hang out here and make comments that do not further the debate. Like, "Stupid article" or "Yeah, the people you're talking about are dumbasses" - these kind of comments are often deleted from this site if they do not further a rational conversation or observation.

In some ways, I'm glad this site is the way it is. It sets it apart from other sites. I feel other sites seem like they have no control over their forums, their members, or their message. My opinion is clear here! And while my opinion can change; it doesn't do so through childish remark; only spirited factual (and linked, backed up) debate.

One of the articles that I get the most comments on and have the most links to is: Paypal Ain't My Buddy. This article has actually made it into Wikipedia! (And was summarily removed by an anonymous editor recently ... anyone care to add it back?)

While the topic of Paypal and eBay veers slightly off center from the themes of Jackwhispers normal content of Apple Community Scams and Business Ethics ... I realize a lot of Apple Techs and businesses (including Apple Computer) use Paypal. And, of course ... if you buy or sell Apple stuff on eBay ... Paypal is the fastest and easiest way to pay or to receive money.

The latest comment I received was from a guy who sells high end car engines on eBay. He took offense to my saying, "You're either weird or stupid if you don't use Paypal". In his email, he laid out several instances where he felt he had been cheated by Paypal. You will get the jist of his email by my response:

"Paypal has ALWAYS had the ability to be "charged back" from a credit card company. But you are right in the aspect of Buyer Protection changing rules. It's more Paypal succumbing to eBay (it's largest source of revenue) and then in 2005 actually being purchased by eBay.

See, before eBay ... always ALWAYS sided with the buyer in almost 99% of disputes ... reason being ... they felt a buyer and seller had a true commodity (value) in feedback. They figured neither party would risk much due to the feedback system and eBay Safe Harbor. This worked for the first few years eBay was in existence. But as crime has turned from the streets to the net ... criminals have figured out that BUYING is the the new scam ... not selling or pretending to sell.

At the same time, when Paypal was first starting and purchased X.COM = how it became a checking account and debit card company too ... PayPal ALWAYS sided with the SELLER ... this is why at first Paypal was an eBay seller's dream ... but remember what I said about eBay? People were selling, offering Paypal, and ripping people off ... as eBay changed and as scams turned from selling to buying ... well ... you get the picture!

As it stands now, there is no balance between Paypal and eBay ... they both protect the buyer the majority of the time. There needs to be balance in place again. My thoughts are that it will resort in almost everything over $200 sold on eBay will have to go through escrow. Another thought is that eBay will ask local listing companies to also become drop off stations for both the cash and the products to be shipped and you will have to go pickup the items from these locations rather than having them delivered. A third option is that eBay listing companies may end up being mediators and they paid by eBay (much as Squaretrade is now).

I will say this to you again, the benefits outweigh the problems (for now) to me on Paypal ... I have found enough ways to safegaurd myself. I also almost obsessively pursue ANYONE who tries to cheat me ... I will find you ... I will make your life miserable ... even over $25!"