DLO Says DL NO to Griffin and Belkin

Digital Lifestyle Outfitters (DLO) have filed a lawsuit against Griffin and Belkin for patent infringement, reports the iPodObserver. The suit alleges that the companies are violating a DLO patent that covers a type of FM radio transmitter and charger that allows users to play an MP3 player's music through a car stereo. "DLO feels that Belkin's TuneBase FM and Griffin's RoadTrip directly violate its patent," notes the story. "Both products are iPod accessories that compete directly with DLO's TransPod. Both suits were filed in the United States District Court for the Middle District of North Carolina." DLO is seeking "injunctive relief, monetary damages, and enhanced damages for willfulness, claiming that both companies willfully violated the patent." 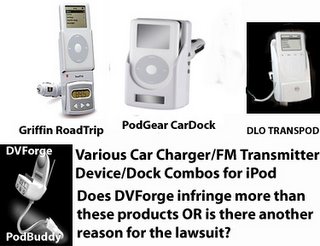 There are many issues involved in this suit ...

From evidence that I have been made aware of ... DLO may have stolen this idea from a Taiwanese supplier a few years back, brought it over to the US, and filed a patent on it ...

I am also aware that former design engineers from Griffin, now work at DLO.

Since I have been closely involved with the Jack Campbell side of this and in the process of producing my own iPod peripheral, I have been privy to both sides of this story.

My personal opinion is that Belkin, who simply rebranded a Taiwanese unit (and was almost identical to the PodBuddy that Jack Campbell planned to distribute) IS a patent infringement ... but the legal waters get choppy with the Griffin implementation ... it is completely different in the manner and function in which it connects; as it can also connect with a detachable transmitter directly to one's home computer or laptop.

I also know for a fact, that while DLO did not design anything, but the exterior casing on their Transpod ... that Griffin custom designed the internals and exterior of the RoadTrip.

My biggest beef with all of these companies, after dealing with them directly and personally, is that they all seem to care more about controversy than competition!

Griffin Technology has responded to the patent lawsuit filed by Digital Lifestyle Outfitters (DLO), which we reported earlier today. A representative of the company told MacMinute:

"We do not believe that the DLO patent is valid, nor that any of our products infringes the patent. In 2004 we sued Netalog for a declaration to that effect; that their patent is invalid and not infringed upon.
We have filed motions asking that the case be dismissed on those grounds and that the Court is currently considering those motions.

Additionally, DLO filed the lawsuit against us during a period when DLO was secretly recruiting one of our senior managers, which is currently under separate litigation."

In May 2005 Netalog, Inc. filed a Complaint against Belkin Corporation in the United State District Court for the Middle District of North Carolina alleging infringement of US Patent No. 6,591,085 by 'FM transmitter and power/charger assemblies' manufactured by Belkin.

It is Belkin's firm belief that such Complaint has no merit and Belkin has specified a number of defenses to the Complaint, including but not limited to invalidity of the '085 patent. Accordingly, in September 2005 Belkin filed an Answer to the Netalog Complaint setting forth such defenses. Additionally, the Answer sets forth counterclaims against Netalog for declaratory relief based on invalidity and non-infringement of the '085 patent.

Belkin is confident that a verdict will be rendered in its favor with regard to this matter.

For those interested ... Jack Campbell's DVForge was also named in this lawsuit.