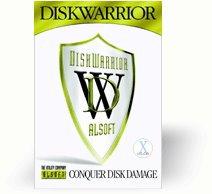 
From above linked page:

October 31, 2005 -- Alsoft, Inc. today released a revised DiskWarrior CD that can start up the most recently released computers from Apple Computer, Inc. As new Macintosh models are released, Mac OS X must be updated to support them. The new DiskWarrior CD is designated as revision 39 and it contains an updated version of Mac OS X that now starts up the newly revised iBook, PowerBook, iMac G5 (with built-in iSight), and Power Macintosh (dual-core) models. The DiskWarrior application is unchanged and remains at version 3.0.3.

Apparently all they added was a few boot files. Read on ...

This is quite ridiculous. Especially seeing since I just bought a new CD yesterday. (And bought one in February) Alsoft didn't make a press release early in the morning .. and as far as I can see - Jackwhispers may be the first site to announce it.

I also needed the update that this provides. The revision number didn't change. So, this should have been made available as a downloadable update. As an Apple service tech, Diskwarrior is indispensible to me. But, I shouldn't be taxed the 3 to 5 times a year Apple releases new Macs. I greatly appreciate the work Alsoft does, but their customer service and PR with pricing updates has always been abyssmal. Yesterday, when I called, as usual; I received rude, insensitive operators.

Apple releases most stable version of Tiger, that breaks few things & increases stability across the board

Meet the world’s most advanced operating system. Mac OS X Tiger delivers 200+ new features which make it easier than ever to find, access and enjoy everything on your computer.

This update to Tiger solved a lot of issues I was having with Printing, Safari, and Mail. This may finally be the time I can recommend Tiger to all of my clients.

When 3.03 came out, I had an email from the support guy telling me where to download it and how to make my own CD from the update. I've had minor problems until now with various things - one a credit card - another a tech question. Alsoft handled these questions promptly and efficiently. You may have had a problem with them, but I certainly didn't. DiskWarrior has saved my life many times. They make great software and my experience (since Version 1.X?) has shown me that their support is anything but "Abysmal."

This may be an issue with how Apple licenses OS X 10.4 to Alsoft, not Alsoft's own quirk.

I notice that they do offer a downloadable program that can create a new CD with a new version of DW, but it will only boot the Macs that your current DW CD will boot, not newly released Macs.

So therefore, the updated software on the new CD for $12.95 must be from Apple. I would guess that Apple either won't license Alsoft to make that part of OS X downloadable, or would want more money from Alsoft. I guess it's also possible that Alsoft has simply never looked into the possibility.

FWIW, as a DW customer myself, if bandwidth is the issue, I wouldn't care if they made a password-protected torrent to download the (presumably) large update that would allow booting of more recent Macs. As long as it was accessible. I agree the current fee seems excessive.

Give Alsoft a break.

Dealing with Bootable CD/DVD OS X technology is not simple. It is totally different than OS 9, when all you needed to do was throw a helper file in the System folder.

I would give Alsoft huge credit for even getting the OS release update disc out so soon. Its a very difficult task being an Apple developer these days, and you can bet your booty they are doing the best they can.

You cannot just "ship" a bootable utility CD. The whole process is under NDA, but believe me, it is a pain in the rear to jump through the necessary hoops, licenses and fees to do this. I understand as an end user, all you want it stuff to be automatic. So do developers. But it is not, and we have to deal with it.

I do give Alsoft immense credit for a terrific utility. As mentioned, it has solved more problems for me quickly than any other single factor (hardware or software). In fact, it was pretty much the only way I could get Tiger to install on almost a dozen Macs; when Tiger launched.

But, this is the VERY REASON Alsoft needs to be more conciliatory.

Contrary to jon davis's report above, Alsoft has been rude in their customer service to ME and almost ridiculously steadfast in charging ANY time they can.

They make more money than you think, and they are a larger developer than anonymous said above.

Look, I sell at LEAST 8-15 copies of this utility every year. I personally buy 5-7 copies. I support them with pride. I don't expect to get a free utility for life, but I do expect for Alsoft to add something each time they expect people to pay for an update. Adding support for computers IS NOT adding a feature.

Since retailers don't take back software (AT ALL) I contend that Alsoft is false advertising by saying the utility even works. It should work will all the Macs that it is sold beside - period

I think you made a typo. No big deal...just bringing it to your attention.

good eye - but it wasn't a typo on my part - I just copied and pasted from the Apple page - it had not been updated yet.

Thanks for the correction.