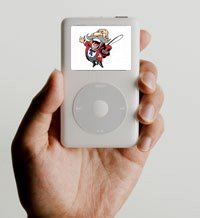 iPod thumb? ... could very well be the cause of discrete repetitive stress injury according to Carl Irwin of the British Chiropractic Association. He set the record straight for ... Apple MP3 player inflicted pains: “The action needed to move the wheel on an iPod is totally unnatural and effectively separates the joint in the thumb every time you use it.” His patients apparently have had iPod-related RIS issues not only in their thumbs and fingers, but as far up as their elbows and necks....

I really thought I was reading a joke when I first saw this ... but it is real ... and this chiropractor is actually making this claim.

This really just speaks for itself and the utter stupidity that the iPod is bringing to surface as it filters more and more into pop culture.

I have had a growing malady myself; Bristish Syndrome. It is the stress caused by Brits who sue because they don't like Americans or American made products.

Ya someone needs to call their doc.....but probably for mental health issues....I have Carpul Tunnel and my Ipod has never given me issues....

Realistically, if we started sueing companies for the stress in our lives we wouldn't have any companies to sue because they would all go bankrupt.

Let's start from the top and go to the bottom, shall we? I have a lot of friends that wear hats and there have been a number of studies that suggest that wearing hats may contribute to hair loss. If you think that men losing their hair doesn't contribute to their stress level . . . guess we'll see Stetson in court.

All of the disclaimers on packages have very small type that is often difficult to read. Because we don't want to have a heart attack because we took a cold medication, we read these things. Squinting, headaches, eyestrain=stress. Anacin, you are SERVED.

Who knew that putting 250 watt speakers in your door panels would erode your hearing? Damn those high-end audio companies for making equipment capable of ruining our ears! Alpine, give us a settlement offer.

Laptop computers create a LOT of physical stress. The small keyboards, the unnatural trackball/trackpad, and the too-small screens combined with the un-ergonomic screen height and angle are sending us straight to chiropractic hell. Dell and Gateway, we're gonna OWN you.

Alarm clocks are eroding our psyches and jolting our brains, creating exorbitant amounts of stress in the morning when we need to be brought gradually from a state of relaxation to alertness. Its time for Big Ben to pay the price!

We could write a book about this. Here's the facts, Jacks: Life is full of stress and the devices and inventions that are designed to relieve that stress bring with that relief other stresses of their own. The automobile, for example, relieves the stress of having to walk ten miles one way to work, but the unergonomic seats can make your back sore. Life is full of trade-offs and compromises and we take those on ourselves and choose to do so. People that play video games and use an iPod understand that they require the use of their thumb; a lot of use of the game or iPod would require a lot of use of said thumb. Perhaps the thumb-weary could do less of what aggravates them? I suppose that would require growing up and taking responsibility.

Here's a really unique concept: products in the marketplace that make people hurt or annoyed usually get abandoned--and quite often they are replaced by products that correct the problem. UNLESS--and this is a big UNLESS--there is enough value in using the product as is to OFFSET THE NEGATIVES.

I think I've got a major case of the British Syndrome myself. I guess I'll go have a spot of tea and sue Lipton for keeping me up all night.