Picking An Apple To Pick On

Ok, so apparently some people are having some weird horizontal line issue with the new Apple PowerBooks that have the higher res, higher brightness displays — apparently it’s even something that’s been spotted on display models in Apple stores. Frankly, given the gallery of pictures of the issue, we can’t really see much of a problem going on; then again, it may well be one of those things you have to eye in person to properly perceive...

And here is a close up picture: 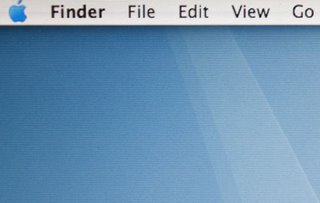 Do you see anything? What I see is a kind of optical illusion ... the only way to tell if this problem were real is if the people would test the screen with solid colors.

What is the deal with everyone picking the smallest of things about Apple lately?

Of course this wouldn't be Jackwhispers, if I didn't float these reasons out there:

2) Disgruntled employees or contractors (those fired over leaks)

3) The person(s) behind the reseller lawsuit (Elite Computer, Macadam)

I forgot they were there. I saw them the first week I had the new Powerbook, but honestly until you mentioned it I hadn't seen them since.