Lugz Think Their Thugs Look The Same As Apple's 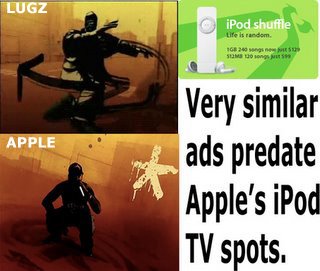 Footwear company Lugz sent a cease and desist order to Apple on Friday claiming that Apple's latest iPod TV spot is a copy cat. Steve Jobs liked this ad so much he had to show it twice at the special media event a few weeks back.

An interesting development to say the least. Because, Lugz ad campaign actually predates ALL the iPod silhouette ads. It is from 2002.

The most interesting thing I see in the ad - a similar arrow animation to Apple's previous iPod Shuffle campaign.

Personally, I have always thought the iTunes Silhouette Ad campaign was weak. It didn't showcase how cool the iPod was. Ironic, that a weak product, the iTunes Phone (Motorola's ROKR) actually had a more innovative ad campaign.

I think Lugz has a good case here, most people who file suit against Apple are just trying to make a buck at Apple's expense, but I do see merit here.

The ad creator at Chiat Day (Apple's ad creator) will certainly be firing someone.

* Motorola's ROKR cellphone is the 1st cellphone to use Apple's iTunes

* The iTunes Silhouette Ad campaign is actually a camera technique that was developed in the 70's and used on The Muppets and Sesame Street by Jim Henson.

[UPDATE] One last editorial opinion (I thought about making this a separate article) ...

I think Apple is realizing an old saying, "Hang with bad people, and bad things happen when you hang with them."

Note that Emimen previously had sued Apple (but apparently dropped the suit) over using his song in a Switch campaign commercial.

Now, it appears Eminem has dropped the lawsuit, but Apple is now being sued for a different reason ... for using Eminem in a copycat ad.

I actually like some of Eminem's music, but I wouldn't promote him with my company as Apple is doing. While many disagree with Bono's politics ... no one would say Bono is a thug and I rarely if ever have heard Bono use questionable explicit lyrics in his songs. Bono also tries to make himself out to be a positive role model for world economic change ... Eminem ... last time I checked wrote a song about how he hated his mother and another about a guy killing his girlfriend and committing suicide!

I remember the Lugz spot from back when it was played, and within 3 seconds of watching Apple's new ad, I was calling it "a copy". Blatent. Bad Job Steve. Just because everyone copies you, if Lugz had come out with their ad in 2006 instead of 2002, you'd bite them .. hard. Lugz is doing the right thing - the thing Apple would do.

But merit against who ... Chiat Day or Apple?

I wonder. I love apple products, they are great. Hell, I love Apple. But Apple is pretty pretenctious a lot of the time, so in this case, where we know Lugz is right, it's time for Apple to bow out. It was a pretty cool looking ad, yes. I'd like to see Apple come up with a really cool innovative ad, one that is as innovative as their products - like the Hal ad back in the day ;)

I agree that it is somewhat troubling that Apple's ad looks almost identical to anybody's ad. For one thing, we have all grown to expect Apple to stand out from the rest of the world--to innovate when everyone else is copying. To start new trends, not pick up on old ones. To just be . . . DIFFERENT. Personally, I like the iTunes/iPod ads because I think they highlight the distinctive earphones and cords being white and being distinctly Apple's product. Who can walk down the street now and not recognize an iPod user simply by looking at their headphones? What an ingenious idea! What an incredible branding slam-dunk! The Apple ads bring particular attention to this and I think that was a very innovative way to brand their product.

That said, I am troubled by the apparent copycatting. However, I have to ask the question--is it possible for someone to own a concept like using sillouettes? Or using edgy urban backgrounds and characters? Or a choreographed general dance routine? Can Lugz sue on the basis of "owning" these conceptual elements? I don't think so and I think it would be a bad precedent for them to be granted a victory in such a lawsuit.

First of all, where is the harm to Lugz? I haven't seen a Lugz ad on TV in ages. They're not a particularly well-differentiated brand; they look just like any number of casual, urban-look shoes like sketchers. Their particular venue of popular advertising is print, and I can't remember seeing anything looking like an iPod ad in a Lugz print ad or vice-versa. We're not even talking about competing categories; if the iPod campaign is successful or wildly profitable it does nothing at all to Lugz bottom line one way or the other. If Apple had a line of tennis or casual SHOES on the other hand, I can see the damage. The two products couldn't be any more different.

Secondly, if the Lugz campaign was in 2002 and the ads in question at running three years later, where is the harm to Lugz? There is none.

I like and REMEMBER the Apple Eminem commercial. I can't remember the Lugz commercial. I would bet that the great majority of people that saw it don't remember it. So clearly while there are shared elements in the two commercials there is enough difference to make a difference.

Apple is not really responsible in any case; their advertising agency is. It is the ad agency's responsibility to check out the trademarks and so forth with their creations. Apple has their hands full checking out issues relative to their actual products and all of the ridiculous, frivolous lawsuits that way too many people send their way.

Should Apple offer Lugz a peace offering of some type as a gesture of good will and principle? Sure. Let Lugz put a reasonable value on what they did three years ago and submit it in an effort to achieve fairness and good will. Don't waste everyone's time and money going to court over something that is totally not hurting them at all.

How scary is it going to be when people can start claiming rights to concepts like this? Is a particular cultural group going to object to a commercial that uses a particular dance style and insist that it belongs only to their culture and they need to be paid for the rights to use it? Come on.

Buzmania said: "Should Apple offer Lugz a peace offering? Sure."

Should they? NO! If they do so, they open up the can of worms that says I could extort Apple - make them settle for giving me $10,000 instead of that MILLION I threatened them with.

I am definitely NOT for quickly settling nuisance or ridiculous lawsuits because as Jack says, it only encourages bottom-feeders.

In this case, however, it is clear that damage has been done even if there was no intention to do so. The article is centered around that premise. I don't think that Apple's approaching Lugz with an attitude of understanding where they're coming from and asking "What can we do to make this right?" is anything short of integrity.

Here is what I think is a great parallel to this situation. Years ago, I witnessed a drunk motorcyclist trying to mount his Hog on the street after leaving a hangout. I was parked behind him on a slight grade. He could not handle the large motorcycle in his intoxicated state and backed into the side of my car, scratching down the entire side of it.

When I approached him and told him that I would need to call the police and get insurance information he asked me if he could pay me out of pocket for the repairs to avoid the insurance hassle. He seemed like a sincere guy that was admitting his unintential guilt and I thought that was reasonable. I got a witness, had the guy sign a note of intent, and long story short he paid for the entire repair of my car to the tune of nearly $2000.

Yes, I could have sued him and punished him for doing something foolish. I probably would have made a point to drunken motorcyclists everywhere. I may have been compensated more richly for my trouble. I thought, however, under the circumstances that his offer was fair and spoke well of his integrity (admitting his fault, however unintentional) and his desire to avoid unnecessary trouble (insurance company, police trouble).

Apple's motorcycle accidentally ran into Lugz' Volvo. Offering to compensate Lugz for their unintentional damaging of their property is a reasonable and right thing to do and has no bearing on future lawsuits.