Scent Of A Woman, in my opinion is Al Pacino's best role. The movie is full of memorable scenes and especially memorable lines. It's also a Thanksgiving/Christmas holiday movie as the story centers around a student's fall break.

If you've only seen this movie on TV ... you've missed a lot. There are nearly 20 minutes of the movie cut due to "PG-13 elements" and vulgar humor. But, like any Eddie Murphy concert, most of the jokes don't work without the sexual innuendo or cursing. In the DVD version, you get to see more of Col. Slade (played by Al Pacino) through his hard line attitude.

I have always loved this line from the movie, as it holds true to my own life;

"If I were the man I was 5 years ago, I'd take a flamethrower to this place!

Here is a brief plot synopsis:

"Frank Slade is a retired Lt Col in the US army. He's blind and impossible to get along with. Charlie, a prep school student on financial is looking forward to going to a ivy league college. To help pay for a trip home for Christmas, he agrees to look after Frank over Thanksgiving. Frank's niece says, "It will be easy money", but she didn't think her blind Lt Col relative would be spending his Thanksgiving in New York ... doing the tango, chokeholding other relatives at dinner, and driving a Ferrari ... not to mention his plans for a military issue revolver!"

The next movie(s) are Cube & Cube II. These were small, independent, direct to video releases that have a small cult following amongst geeks everywhere. If you were to give the movies a genre, it would be sci-fi ... but they have so much more depth than that.

Obvious that first movie did well enough to make a second ... the second is even better, due to a slightly bigger budget. That said, this set of movies really proves that quality movies don't need the big budget and stranglehold distribution model that Hollywood currently pushes.

Here is the plot summary from IMDB.COM:

Seven total strangers awaken one day to find themselves alone in a cubical maze. Once they meet, they work together using their given skills and talents to survive the deadly traps which guard many of the colored cubic rooms. Using Leaven's mathematical skills, they press forward, upword, and downward through the hatches to try and find the outer shell.

There has been a 3rd movie made, called Cube Zero but it just came out on wide release video a few months ago ... I haven't had a chance to see it yet, but certainly want to.

[UPDATE] : Saw Cube Zero and didn't like it at all - it's mostly centered around the construction of the first Cube prison.

Oddly enough, when the Apple G4 Cube came out ... I was an Apple Market Representative ... to showcase the DVD-ROM in the Cube ... I used the 1st Cube movie ... I sold several copies of the movie with the purchases of G4 Cubes! 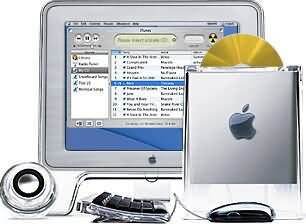